You're a slacker, McFly

After our failed attempt to pretend to buy a DeLorean, we decided to swing by "Chiller Theater," a sci-fi convention at a hotel in Parsippany. I know, it sounds too good to be true.

Samuel's goal was to take a photo with James Tolkan, aka Principal Strickland from "Back to the Future." 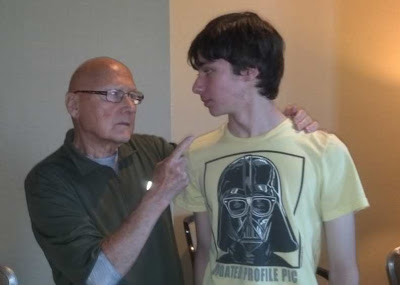 And so our Saturday afternoon ended on a high note.
Posted by Todd Tarpley at 10:30 PM No comments: Links to this post

We went to a classic car auction in New Jersey today and pretended to buy cars. Here were my 5 fantasy purchases:

5. An early '80s Mercedes with a removable top, for when Samuel and Ethan are in college and Jen and I don't need a back seat. 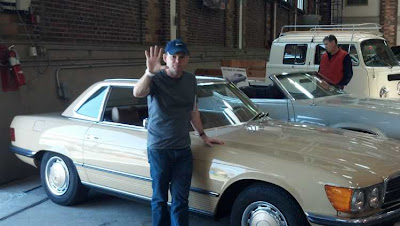 4. Mid-2000s Jaguar convertible, for when Samuel and Ethan are in college and Jen and I adopt a couple of very small kids with no legs to sit in the "back seat." 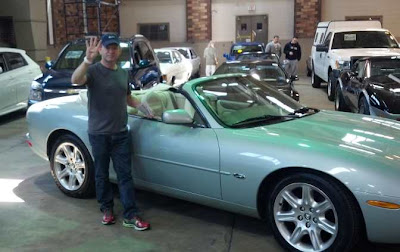 3. Okay, now things are getting interesting. 1979 Trans Am, to drive to my next high school reunion blaring "It's Still Rock'n'Roll To Me" on the cassette deck, so that my old classmates can stare in awe and say, "Wow, that's so sad." This went for less than $10K, and if my Monopoly money had been real, I would now be the proud owner. That's so sad. 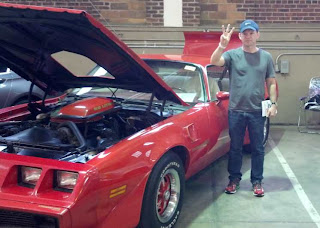 2. '54 Corvette. If I had this car, people could say anything they wanted about me and I would go, "La-la-la, not listening, don't care." It's only #2 because I've pledged to Samuel that if we ever actually buy a car it will be a DeLorean, and that goes for Fantasy Auctions as well. 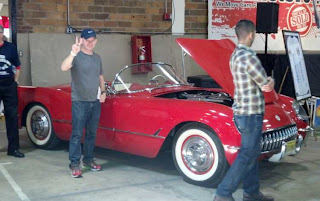 1. And so...an '81 DeLorean. My Monopoly money bid was $18K. The high bid was $17K, so Samuel and I were high-fiving like we'd really bought it. Then the auctioneer said, "Sorry, not selling this one today, the reserve is $25K." Samuel and I were crushed, but I said, "Think how disappointed we'd be if we thought we'd actually won it." 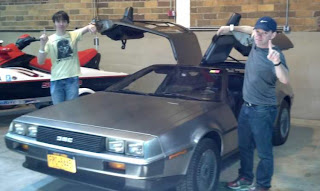 We broke the news to Jennifer when she returned an hour later from her non-fantasy shopping trip to Target.
Posted by Todd Tarpley at 10:13 PM 3 comments: Links to this post

I just got back from a conference in Miami. Yeah, it sounds fun on paper, but I should note that it was at a hotel near the airport, surrounded by concrete.

The highlight of my trip, aside from playing "touch fingers" with a giggling toddler at the airport, was skipping the closing session of the conference and taking a cab to a place in Coral Gables called the Venetian Pool, which I'd seen in a hotel guest guide. Ostensibly I was trying to beat the rush to the airport, but honestly I just needed an excuse to see this place. I wasn't even sure I was going to swim until I got there, at which point I practically jumped in with my clothes on.

The Venetian Pool is the only swimming pool on the National Register of Historic Places; it was created in 1923 from a coral rock quarry and is fed by a natural spring. It's now the municipal pool of Coral Gables, and it's definitely the coolest municipal pool I've been to.

When I was there yesterday at 3pm, it was 84 degrees and sunny. There were a total of four kids and two adults in the pool. Okay, I probably would've opted for a dozen more toddlers, but we take what the market will bear. 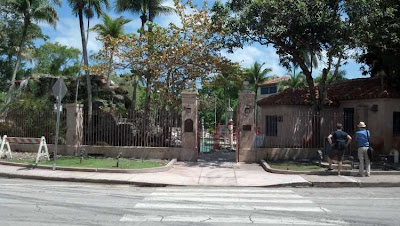 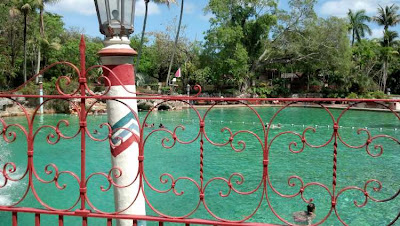 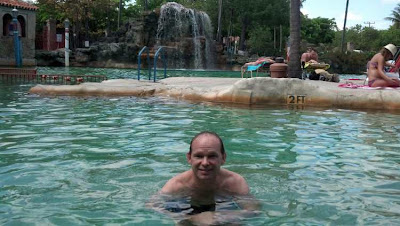 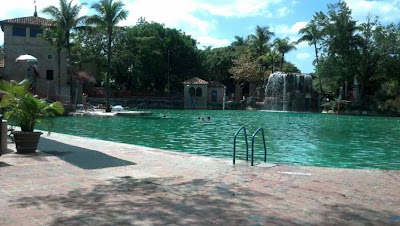 Posted by Todd Tarpley at 11:56 PM No comments: Links to this post 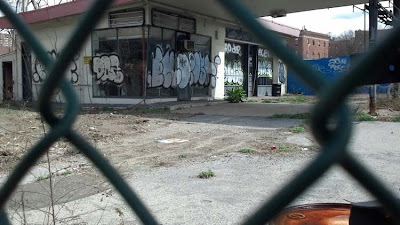 Ethan said, "Don't you wish there was a zombie apocalypse? Then this could be our house."
Posted by Todd Tarpley at 11:16 AM No comments: Links to this post

How to install roller shades in only 7 months 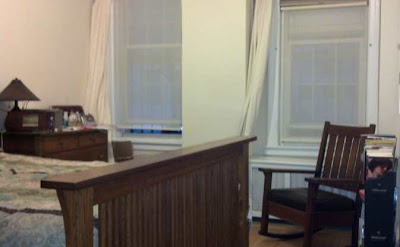 Step 1: Buy shades. Store them somewhere convenient until you're ready to install them.

Step 2: Forget where you stored them. Finally locate them at the back of a closet that requires you to take everything else out to get to them.

Step 3: Start drilling the holes to hang the brackets. Go search for an extension cord when the power drill doesn't reach all the way. Find it at the back of the same closet.

Step 4: Try to screw in the screws with the drill, but quickly realize that it just makes a loud grinding noise and strips them. Screw them in by hand with a regular screwdriver. After thirty minutes, get them almost all the way in.

Step 5: When they stop going into the wall with 1/16 of an inch left, even after you've rubbed all the skin off your palm and are sweating like a pig, reluctantly unscrew them all the way and re-drill the holes a little deeper.

Note: on the very last one, if you force the drill a little too hard, you may notice that the drill bit actually comes out of the drill and embeds itself deep in the wall. If that happens, ignore it. The odds of ever using the drill again were slim anyway.

Step 6: Hang the shades. Sit back and enjoy.

Optional step: If you want the shades to pull down evenly rather than listing slightly to one side, you may want to consider using a measuring tape prior to drilling the holes. Whatever.
Posted by Todd Tarpley at 8:52 PM No comments: Links to this post 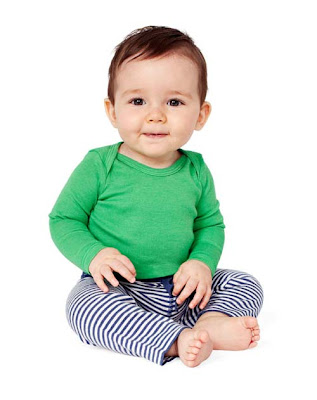 I was walking down the stairs to the subway on my way to work, and at the bottom of the stairs were two foreign-looking women with a baby and a stroller, getting ready to come up.

I was thinking, "Damn, I must've just missed the train."

As I was passing, the older woman, who appeared to be the grandma, tapped me on the shoulder, handed the baby boy to me, and pointed up the stairs. I said, "You want me to carry him up the stairs?" She didn't speak English but nodded.

So I carried the little boy up the stairs while he stared at me with his big brown eyes. When we got to the top, I kissed him on the forehead and handed him back to his grandmother.

That made my day.
Posted by Todd Tarpley at 6:39 PM No comments: Links to this post 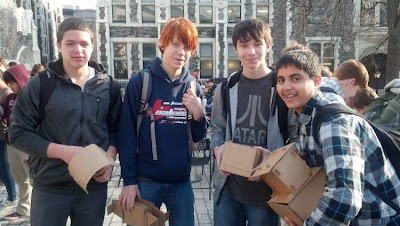 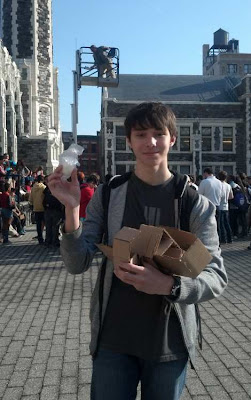 Posted by Todd Tarpley at 4:27 PM No comments: Links to this post

How to replace old radiator screens in only 3 years 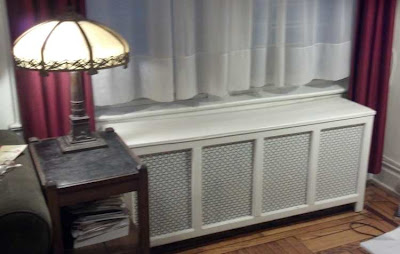 2. Store them against a wall in your foyer for 1 year.

3. Eventually try painting them white. When the metal still shows through the first coat of paint, forget about them and give up.

4. A year later, get motivated and paint a second coat. Store against a wall in another room for 9 more months when your wife says, "Don't put those back in the foyer."

5. Walk past them them every day and occasionally think what it would be like to actually install them.

6. After 3 more months, place the large wooden radiator cover on its side on the living room floor, remove the nails holding the old, warped metal screens, remove the old screens, cut the new ones to size and prepare to nail them in.

7. Realize you don't have any nails. Think, "Dammit, I knew this would take more than an hour." Go to hardware store and buy some. Come home. Misplace the hammer you had literally 30 minutes ago. Curse. Finally find it on the floor under the radiator cover. Apologize to your kids for cursing. Nail in the new screens and place the finished product back over the radiator. Brag to your wife about your handyman skills.

Note that your actual completion time may be longer or shorter than 3 years.
Posted by Todd Tarpley at 11:01 AM No comments: Links to this post 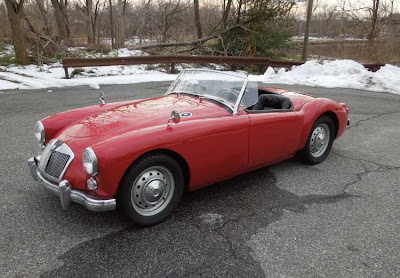 I used to own a 1960 MGA convertible. Going for a run now is like driving that old sports car: I feel like I'm theoretically capable of going fast...but, you know, why risk blowing a gasket?

The first mile of every run is basically easing into it and staying hyper aware of what part of my body is likely to fall off. "My left knee is sore...my right heel is hurting...my left calf muscle feels like it could pull." And by the time I'm into the second mile and more loosened up, I'm too tired to will myself to go faster anyway.

But I went for a run on Saturday, and for the first time in probably a year, I wore my watch.

I ran again today, and even though I told myself I'd take it easy, I was actually thinking, "I should be able to hit, say, 6:52."

Posted by Todd Tarpley at 12:28 AM No comments: Links to this post