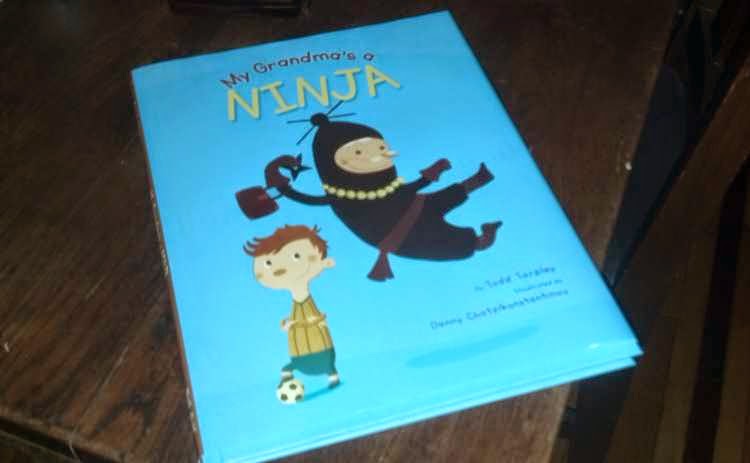 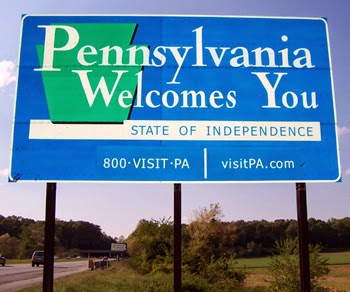 Jen and Samuel took an overnight trip to Pennsylvania this week to visit potential colleges. Well, to be clear, they were actual colleges, but they are potentially colleges that Samuel might attend. On their list was Swarthmore, Villanova, Lafayette, and Bucknell.

According to Jen, they were late to every tour, which was not a surprise to me.

The big surprise is that Villanova is Catholic. When did that happen? Oh, 1842? Okay, whatever. Not that there's anything wrong with it. Jen said the admissions director was prattling on about the rich Catholic tradition, and that while it wasn't a requirement for admission, you know...hint, hint.

But she and Samuel were sitting up near the front of the auditorium (or was it a chapel?), in the middle of the row, and they were too embarrassed to get up and walk out. ("Excuse us, not Catholic, excuse us, pardon us.") So they had to sit for another 45 minutes playing games on their cell phones until they could make their getaway.

In case the admissions directors of Swarthmore, Lafayette, and Bucknell are reading this, Jen and Samuel feel you have wonderful schools and campuses, and you're still in the running.

We need to do a short trip upstate in a few weeks to check out the New York schools; hopefully I can participate, if only to keep everyone on schedule.
Posted by Todd Tarpley at 9:15 PM 2 comments: 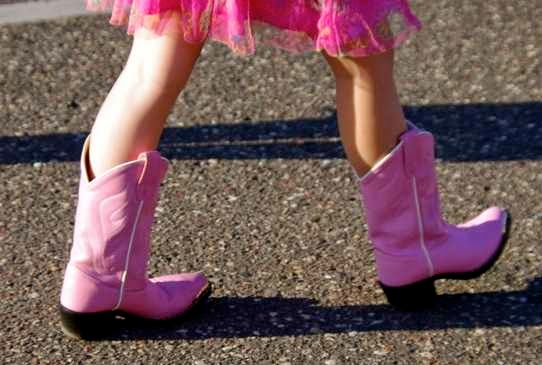 I'm rarely on the Upper West Side during the middle of the workday, but today I had a doctor's appointment at 11:15 on West 70th. I was done by 11:45 so I decided to stop by the apartment and walk the dogs before going back to work.

In twelve blocks I must've seen ten baby carriages, most pushed by nannies. It was a cold day, but the sun was out, and little faces were peeking out, some with red noses and cheeks.

At 76th I passed Riverside Memorial Chapel, and I could hear someone talking inside over the speakers. It sounded like a young man, maybe a little older than Samuel, and he was giving a eulogy. "He always showed in little ways that he cared about you."

At 77th I stopped at the bagel shop. There was a nanny trying to get coats and gloves on two little kids. The little girl was probably four. She had lost one of her pink cowboy boots under the table and was struggling to slip her tiny foot back into it. I smiled and told the nanny that I loved those boots. The nanny said, "She does too. That's all she'll wear."

I love my neighborhood.

I love the babies with their red cheeks, the little kids with pink cowboy boots, the grown-ups who love them dearly and pass on their love and are missed when they go.

I swore when Samuel was born that I'd never complain about anything again for the rest of my life. Of course I don't actually adhere to that vow, but I do use it as a reminder to keep things in perspective. For the most part, I don't complain much.

I am feeling bad about something, and I'm not looking for sympathy, but I need to spill it.

Today Ethan heard back from private high schools he'd applied to, and he was only accepted to one, without financial aid. Which was better than them saying no, at least to Ethan.

He was wait-listed for a couple of others, including the school he really, really wants to go to.

He was likely wait-listed because we don't make enough money to afford the full tuition, but we also don't meet the criteria to be given a lot of financial aid.

Ethan feels rejected. He doesn't understand that it's not him they're rejecting. It makes me feel like a failure as a dad.

We all have to make compromises in life. I wanted to live on the Upper West Side of Manhattan instead of somewhere less expensive and with better public schools. I wanted to work in media instead of finance. I wanted to spend my spare time writing books and being a dad instead of working longer hours.

Nobody can say with a straight face that the powers of the universe dictate that their child deserves to go to private school. Set aside the fact that another child half a world away will get blown up by a suicide bomber tomorrow. We should be grateful we're living on the lucky side of the planet, that we have family and a home and a job, and that we actually have the opportunity to make the choices we do.

I just want Ethan to think that his dad can do anything. That sounds silly, but that's the crux of it. That's what's tearing me up inside.

Thanks for listening.
Posted by Todd Tarpley at 9:31 PM 4 comments: 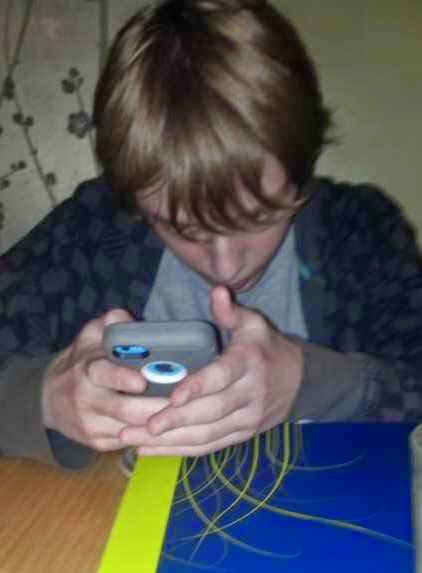 Big event of the weekend: the Iowa/Penn State wrestling match, which was actually on TV--channel 382, the BigTen Network. It reminded me of the movie "Dodgeball" in which the championships were aired on ESPN 8.

DODGEBALL-"ESPN 8-THE OCHO" SEQUENCES from Rick Austin on Vimeo.

The Hawks won, but there was an awful lot of cursing at the TV.

I went for a run yesterday in the February air and didn't pull anything.

I have one manuscript that has a nibble from a publisher--more than a nibble, actually; I think it's mine to lose--and today I finished and submitted my fifth revision. I'm jinxing it by mentioning it, but what the heck. Fingers crossed.

While I was writing I put my headphones on and listened to The Beatles Live at the Houston Coliseum 1965, on YouTube. The audience was Ethan's age. John was losing his voice and missed quite a few notes. And the whole thing lasted a mere 30 minutes. But there's nothing like "Dizzy Miss Lizzy."

The manuscript is done. The dogs need to be walked. I need to go to bed.
Posted by Todd Tarpley at 11:56 PM No comments:

Ethan hangs out with his parents! 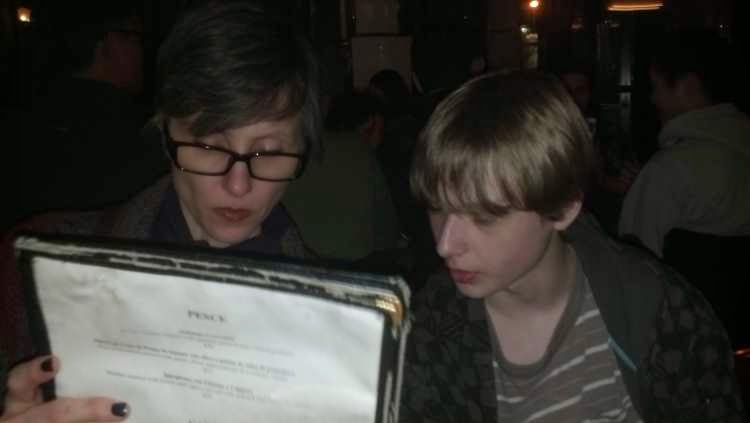 He claimed Jen forced him to go, but he wasn't kicking and screaming. He did check his cell phone a couple of times during dinner, and he did say at one point, "If I could be doing anything I wanted right now, I'd be on the computer."

Samuel had escaped to a friend's house earlier, so he was spared the public humiliation.

This is kind of like the teenage version of taking a toddler to a restaurant. The toddler doesn't really want to be there, but the parents do it because they like the idea.
Posted by Todd Tarpley at 11:48 PM No comments: 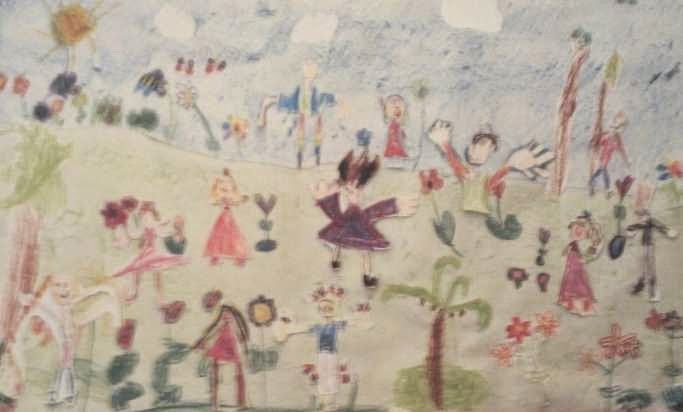 First of all, this is among the worst pics I've ever taken. It looked good on the wall in the foyer of Ethan's school. I think it represents a school full of screaming kids. They hang it in the foyer so you can prepare yourself.

I hadn't been to the school in probably three months, because not only does Ethan go to school by himself, he won't even let me go with him when I want to.

Tonight there was an event at the school--the Multicultural Festival. But that's not important--you can pretty much fill in the blanks using your imagination. The important thing was how much I've missed being at that darn school. Seeing all the little kids jumping and skipping and screaming and bouncing off the walls--literally.

I hung out with Samuel. We filled our paper plates with rice and peas and other spongy Turkish Kathmandu Kazikstani food items, then sat in the area where all the little kids were playing. They looked like they hadn't had recess in about a year.

An exasperated teacher even came and attempted to break up the mayhem. I said Samuel and I would settle them down. Then we sat and enjoyed the chaos for another ten minutes.

Only little kids would think it's fun to have a race from one wall of a hallway to the other--three feet across. Over and over and over. With screaming and jumping up and down after each race. That's what so great about little kids.
Posted by Todd Tarpley at 11:17 PM No comments: