Every now and then you have a great day

I have often dreamt of having five kids. 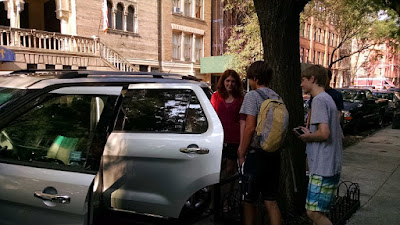 And taking them all to a waterpark on a hot summer day in a big-ass SUV. With a sunroof. And a radio station that plays hits from the '80s.


And in my dream, although it's a hot day, the lines at the waterpark aren't too long, so we get to do some raft rides and body slides. 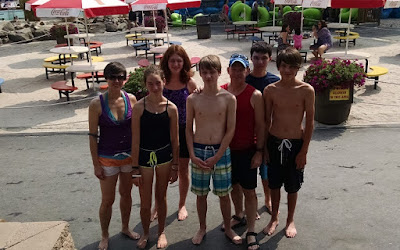 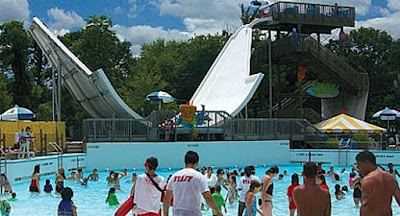 And there are lots of babies to smile at, and I get to lift a toddler wearing a pink tutu swimsuit out of her tube at the end of the lazy river. And we eat pizza and corndog bites for lunch, and the kids get waffles right before we leave, and Jen and I get Blizzards from DQ on the way home. 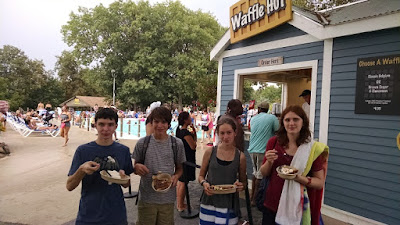 And there's no vomiting or farting or tantrums the entire car ride. And we don't even stop at Target on the way home.

Just a dream, you say?

Good way to end the summer.
Posted by Todd Tarpley at 11:49 PM No comments:

"I have a great job for you"

I got a call today from someone who found my resume on LinkedIn. He was seeking a senior exec to lead the company's 42 websites. He told me how much it paid, and it was a lot more than I'm making now.

So I talked to him.

At the end of the call he asked if I had any questions.

I asked what his role was at the company. He said he was the President. He said he doesn't normally do initial screening, but he was for this position.

I asked the name of the company. He said he didn't want to reveal that at the moment, but if I progressed to the final round of 5-6 candidates he'd share more info.

Hmm. Okay. A little odd. Not a big deal.

So I came home tonight and typed the few things I knew about him into LinkedIn (first name, state, etc.) and found him in about thirty seconds. Then I typed his full name into Google. The first thing that came up was a website warning people that he was a scam artist. Dozens of people on various sites said the same thing.

Cripes, is everyone in the #$% entire world a #$% psychopath?

I'm glad I married Jennifer. That was a smart move, in retrospect.

How sad a life is that? I mean, you only get one. Who are you fooling? What's the point? You get to the end of your life, and...poof. You were a jerk and your whole life was a lie. Then you die. Poof.

I don't like that there are phony and dishonest people in the world. It makes the world an uglier place.

But I like the fact that they make me look really good by comparison. 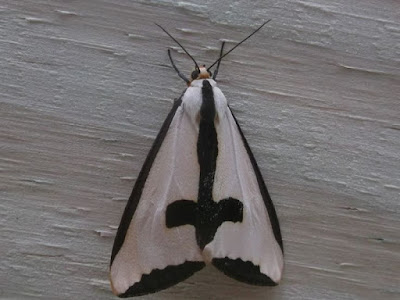 flitting high
around the light
no butterfly
would risk that flight

"These Are a Few of Our College-Tour Things" 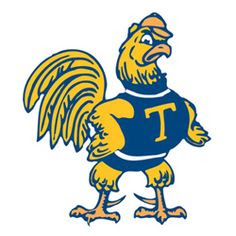 Trinity's Bantam (I think it's a rooster)
A college spelled Wor-sest-er but pronounced Wooster
Tufts' giant Elephant, Dartmouth's Big Green
These are a few of our college-tour things

When's the tour start?
There's a K-Mart.
Can't we just go home?
Until it's September of 2016
All over hell we'll roam.
Posted by Todd Tarpley at 9:15 PM No comments:

"Ode to an Unfinished Milkshake" 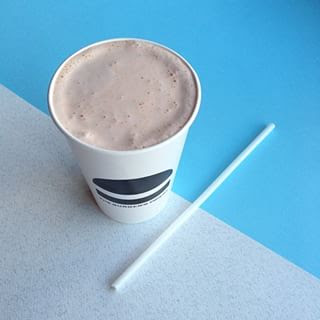 My heart aches, and a drowsy numbness pains

To see you still half full, still half un-drunk
The car interior warming 'til alas thick coldness wanes
Leaving but a tepid, gooey, chocolate gunk.

'Tis Samuel, sweet son, to whom you belong
Who sips but tiny sips then puts you down
While my own milkshake long be gone
And wanting more, yet only his be found.

Milkshake, art thou doomed to go unfinished?
To sit and curdle, urgency unheeded?
'Tis cruel to me, but more than joy diminished
Like a life not fully lived, like summer not completed.
Posted by Todd Tarpley at 7:43 PM No comments: 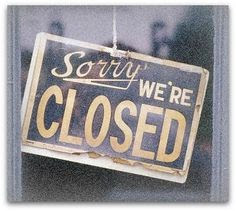 Vacation in Maine
is a bit of a pain.
It's better than work
so I hate to complain.

The scenery's great
but it's lights-out at eight.
Dinner at nine?
Ha-ha! You're too late.
Posted by Todd Tarpley at 7:35 PM 1 comment:

Here are floorplans for both levels of Mars 2112, the NYC theme restaurant that graced Times Square from 1998 to 2012. Click on images to enlarge. 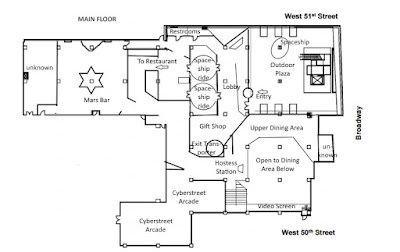 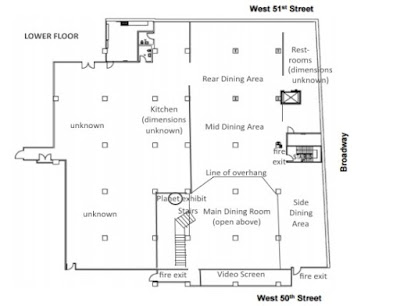 The outer dimensions and location of columns are from the 1633 Broadway website. I filled in the interior walls and other features based on online photos and YouTube videos.

A quick walk-through (starting in the upper floorplan, top right):

You entered from an outdoor plaza, which was down a flight of steps from the street, and which contained a large UFO: 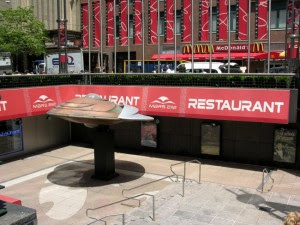 Once inside the lobby, you boarded a spaceship ride to Mars: 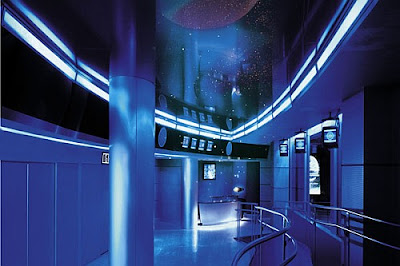 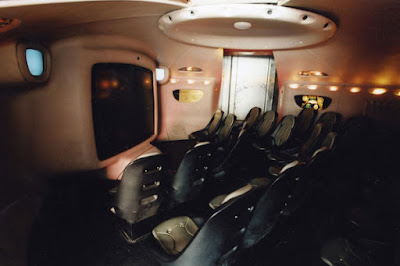 The ride exited to a dark, winding passage to the restaurant: 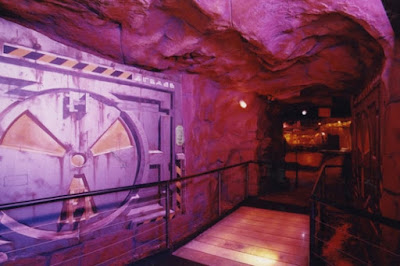 Along the way were a bar and an arcade: 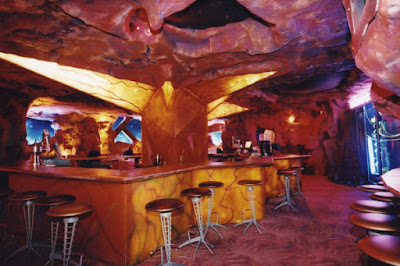 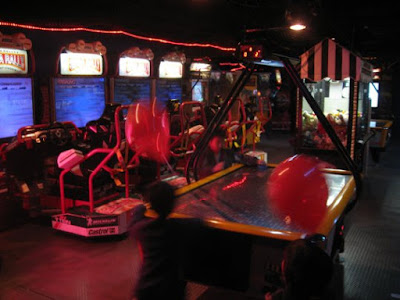 You were then led down an open set of stairs into a vast, double-height dining room where costumed aliens roamed and danced, and videos played on a giant screen. 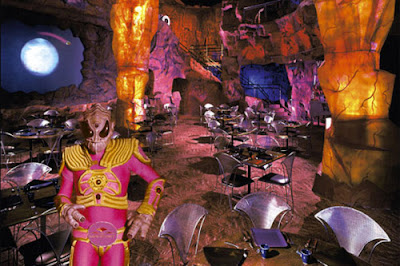 Sometimes you got seated in that open area--more often you got a table further back, under the overhang--which was still perfectly cool. 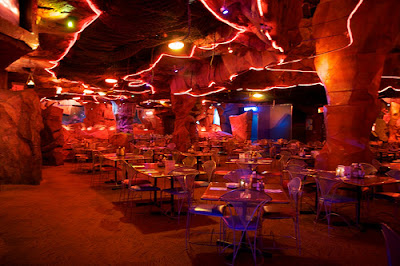 Mars 2112 in its brief heyday was the coolest restaurant in the galaxy--say from 1998 to around 2002. Slowly but surely, it began to wither: the exit transporter stopped working, the alien costumes became grungy, arcade games broke and weren't replaced, and eventually even the spaceship rides stopped working (though Mars 2112 continued to charge an "entertainment fee").

We choose to remember it in its prime.

Surprises and challenges when drafting the floorplans:


If anyone who worked there or has access to other photos or videos has details that I missed, please leave a comment. 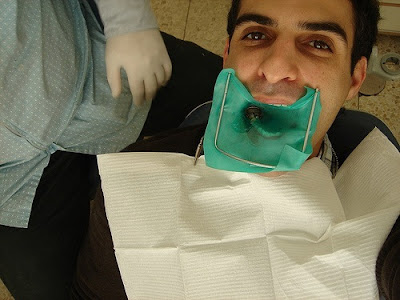 Let's say there's this middle-aged guy who takes a job at a small start-up, which doesn't pay all that well, and--let's say it doesn't have dental insurance either. But the guy figures, you know, whatever, his teeth are pretty good, and by the time he's due for a dental check-up he'll probably have a different job at a bigger company. Why stress about such trivialities?

So that strategy is going pretty well for the first couple of months. But then, because of the stress of the job and his personal finances, let's say he starts grinding his teeth at night.

Within a few months he can tell that he's chipped away a couple of teeth way in the back. The one on the right side hurts when he chews, and whenever he takes a drink of cold Coke Zero it's like, holy crap.

But he figures he'll just ignore it for now--eat on the left side--that's why you have two sides of your mouth, after all.

Then the same thing happens on the left side, and suddenly he has to eat like a 90-year-old, kind of delicately biting into things with his front teeth.

He finally complains to his wife, who, instead of being sympathetic, acts like it's his fault. "Go to the dentist. Make an appointment and go to the dentist." Very slowly, like he's a toddler and doesn't understand words very well.

He says, "I'll just wait until I change jobs and have dental insurance. It doesn't hurt that much."

"I'm making an appointment for you at NYU dental school. It's cheap because the work is done by dental students."

The guy says okay, because he's kind of intrigued by the idea of getting a bargain. And, hey, if his wife is gonna make the appointment....

A week later he goes. The dental student gives him x-rays. She says, "You need a root canal on the right side. And on the left side? You need another root canal." She calls in the dental professor. He looks at the x-rays and nods.

At this point the guy doesn't care any more. He would've preferred to go bankrupt by doing something crazy like buying a DeLorean for his seventeen-year-old. But, you know, he's worn down. Take the damn credit card--who cares? He'll be dead soon enough. 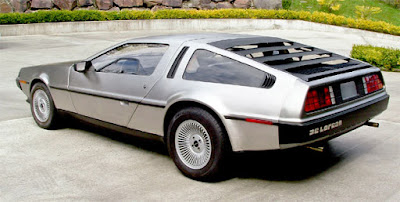 So he goes in a week later to have the first root canal, and it's a long procedure, particularly because the dental student has to keep waiting for her dental professor to come over and check her work and sign off.

It's also uncomfortable. The dental student stretches this weird rubber thing over the guy's mouth so that only his tooth is exposed, like it's open-heart surgery or something. And it makes him feel like he's swallowing a wet balloon, which makes him gag. And when he's not gagging he's accidentally closing his mouth too far and the air suction thingy that's in his mouth keeps going WWWWUUUPPPP. And the dental student has to stop and say, "Are you okay?"

He's okay. The dental student hasn't inadvertently stabbed him or burned him or done a root canal on the wrong tooth, so far as he knows.

Still, he can feel his own wet saliva all over the rubber thingy, which presses against his face and smells like spit and he's quite sure is going to leave a rash.

Which is not nearly as bad as when the dental student opens the infected tooth and the stench of tooth decay is like walking into the community room of an assisted living complex. He realizes his breath is going to smell like this every day when he's ninety, and that makes him think about dying.

He panics. "Code Red? Did I just go into cardiac shock and I don't realize it yet?"

The dental professor comes running by shouting, "Let's go! Fire alarm! Everybody out!" He pauses in front of the middle-aged guy and the dental student.

The dental student quickly yanks out the saliva-covered rubber face mask, which sets off a gag reflex. Then she shoves an entire box of cotton into the gaping wound where the guy's tooth used to be, and off they go. Down the fire stairs, the dental student and the middle-aged guy who reeks of decay and wonders why he had to go work at an effing start-up.
Posted by Todd Tarpley at 11:38 PM No comments:

I knew this time would come

My kids have matured beyond me. Here is a visual representation of the maturity chasm between us: 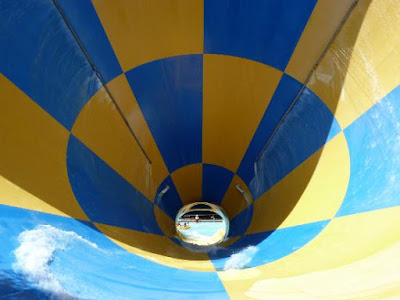 It was a beautiful, sunny weekend and I couldn't get anyone to go to Hurricane Harbor with me. Ethan said he'd rather hang out with his friends. I asked him if he wanted to invite one of his friends. He got no takers. I asked Samuel the same question--same result.

Jennifer said she'd be willing to go with me. I said, "You want to go to a water park?"

A pity water park date. Like when I say I'll go to Target with her.

We stayed home and cleaned the apartment instead.
Posted by Todd Tarpley at 10:14 PM No comments: