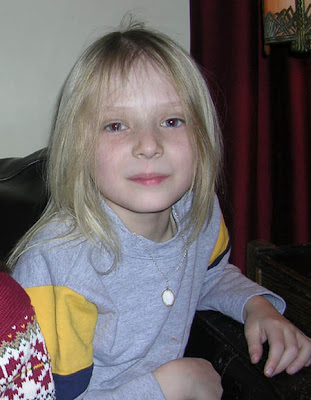 "If you ever get eaten by a giant you should jump up and grab his uvula, and he'll barf you out."
--Ethan Tarpley
Posted by Todd Tarpley at 9:58 PM No comments: Links to this post

Most Overrated Rock and Roll Hall of Fame Inductees 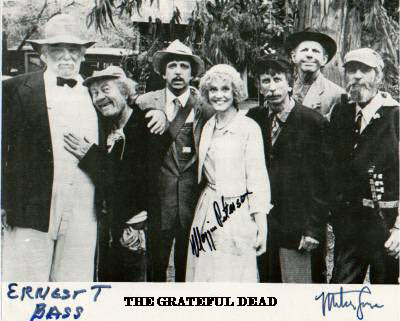 The Grateful Dead: Weren't they that jug-and-washboard band from old episodes of "The Andy Griffith Show"?

The Doors: Come on, baby, light my fire...just please don’t make me listen to that monotonous 3-minute organ solo again.

Bo Diddley: Bop-bop-bop-de-bop-bop. Got it.

Madonna: Yeah, she was flamboyant, but so was Liberace, and at least he could play an instrument.

Jefferson Airplane/Starship: we built this city on...excuse me, I just threw up in my mouth.
Posted by Todd Tarpley at 9:41 PM No comments: Links to this post


We went to the "Gazillion Bubble Show" this weekend, which can best be described as an entertaining "Live with Regis and Kelly" segment stretched into a 90-minute off-Broadway show.

It starts with a short video about two little boys in Yugoslavia. Jano keeps telling his little brother Fan to stop goofing off and focus on their farm work, but little Fan wants to touch a rainbow and play with bubbles. So now, says the voice-over, Fan is a world-famous bubble guy, and he's so great and brilliant that his bubbles can practically cure cancer. And poor Jano, though it's not said, is probably working at a TGIF in Belgrade.

Then the video ends, and the stage curtain opens, and with a big fanfare, out steps...Jano. Huh? The evil big brother? Where the hell is Fan? Apparently off relaxing in the Bahamas while poor Jano is stuck doing the post-holiday shows for the Jersey and Long Island folks who bought half-price tickets.

So Jano does some bubble tricks. Giant bubbles. Bubbles within bubbles. He does a little show-bizzy "thumbs up" thing after each trick so that the audience knows to clap. And there's a new-agey Enya-like soundtrack to reinforce the wonder of it all.

Then...Jano does some more bubbles. And more thumbs-ups. And more clapping. Okay, getting a little redundant. After 15 minutes I'm wondering how much longer til the big finale where the auditorium inevitably fills with thousands of bubbles?

The answer: another hour.

Samuel and Ethan loved it.

Jennifer and I didn't hate it. It was fine.

But I think Fan is a bit of a butt-head. And I pity poor Jano, who must also secretly think Fan is a butt-head, but he needs the money and doesn't want to go back to that TGIF in Belgrade. I think I would like to see a show in which Jano and Fan fight to the death.
Posted by Todd Tarpley at 5:41 PM No comments: Links to this post 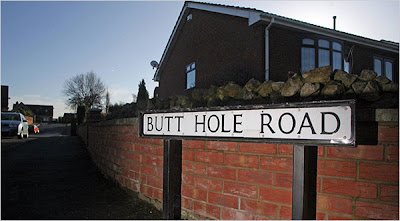 People like me and Samuel and Ethan would rent them.
Posted by Todd Tarpley at 9:48 AM No comments: Links to this post 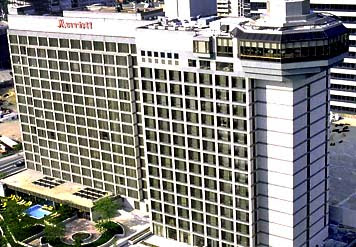 Since it was a three-day weekend we decided to stay at a hotel on Sunday night. Business hotels are cheaper on weekends, especially via Priceline, so it's an inexpensive mini-vacation: swim in the pool, sit in the jacuzzi, jump on the beds, eat restaurant food, just hang out together and pretend you're in the Bahamas.

A night at the Stamford Marriott in January is not exactly a week at Atlantis, but for $90 it's close enough.

Yes, I convinced Jennifer that we should take Kahlua. We saved on a car rental by taking the subway to Grand Central, then a Metro North train to Stamford, then a cab to the hotel.

Kahlua met another Spaniel on the train, so they had a little meet-and-greet. 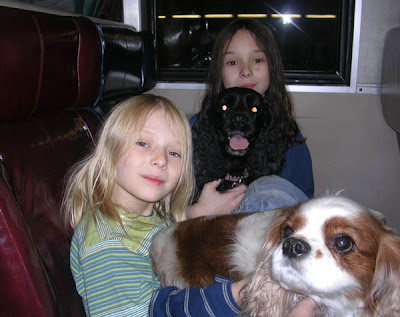 By the time we got to the hotel my arms were coming out of their sockets from lugging Kahlua around in her pet carrier.

We couldn't all leave the room at once because we knew she'd bark like crazy and scratch up the door. So Jen and I took shifts with the boys at the pool, which was directly across the hall. 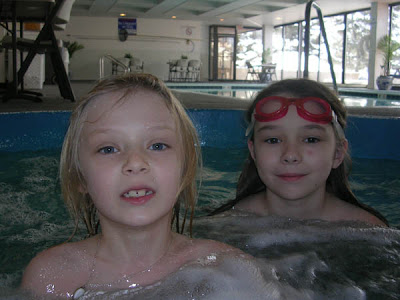 Since we couldn't take her to a restaurant, we ordered room service for dinner. And again for breakfast. 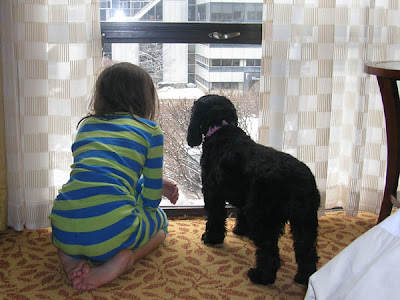 Kahlua loved it, of course. We did too, but in more of a "remember that one time we took Kahlua with us to a hotel?" kind of way. 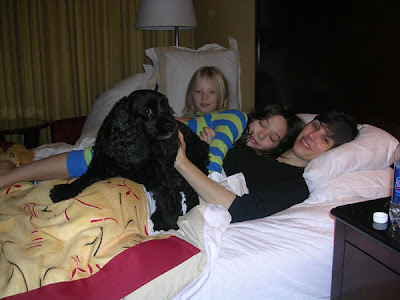 Posted by Todd Tarpley at 3:08 PM No comments: Links to this post 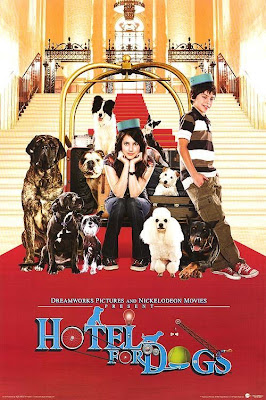 This was the long-anticipated opening weekend for "Hotel for Dogs," which the boys have been wanting to see since the ads started appearing on Nickeloden and Cartoon Network several weeks ago.

Jennifer had no interest (gasp), so I took Samuel and his friend John on Saturday.

Then on Sunday I took Ethan and his friend Zoe. Zoe's dad came too, and Samuel decided he wanted to see it again, so he brought his friend Daniel.

Say what you will, but for me there are few things more fun than being in a theater full of caffienated kids watching a movie about dogs. Twice.
Posted by Todd Tarpley at 2:48 PM No comments: Links to this post 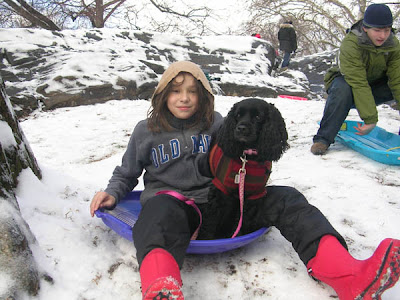 On Friday evening Jennifer said to me, "It's supposed to snow this weekend. What did you do with the boys' sled?"

I said, "You mean the $15 plastic one from 2005 that had been sitting under their bed collecting dust and taking up space but which I had to do something with when we bought the boys a trundle bed last year because there is not a single square inch of storage space left in the apartment? Is that the one you're referring to?"

To which you would THINK she would reply, "Yes, that's the one, and you were smart to throw it out, since it's true that we don't have enough space in the apartment, the sled was big and bulky, rarely used, relatively inexpensive, and easy to replace, and it's true that I horde things like Citizen Kane."

Her actual response was slightly different, but fast forward, the hardware store on Columbus and 90th Street had some in stock, and we all went sledding at Riverside Park today, complete with Kahlua. 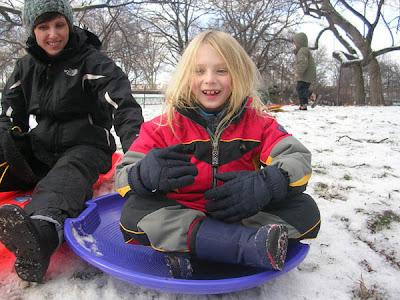 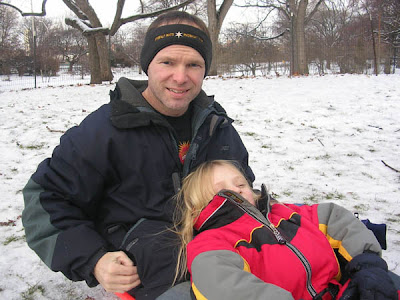 Posted by Todd Tarpley at 9:01 PM No comments: Links to this post 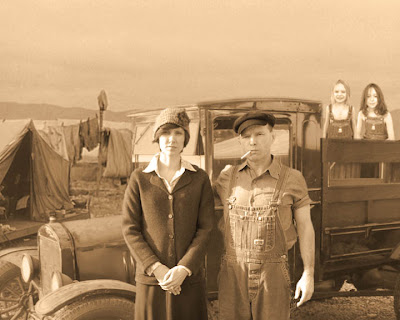 Well, the news is quite good, all things considered.

I started the holiday season by taking a 50% pay cut, as my employer, like most publishing companies, was not doing particularly well. So Jennifer and I sat down and did the math and determined that we could make ends meet as long as we cut out spending on things like Christmas cards and gifts, movies, cable TV, shampoo, toothpaste, electricity, water, food, and mortgage payments. Also, Samuel and Ethan would have to leave home and join the circus.

Alas, the potential loss of toothpaste was a powerful motivator, and I'm happy to report that I have just started a new job; perks include actual paychecks and lights that turn on. I may eventually return to a start-up, but probably not while I am alive.

We are extremely happy not to be living in a tent, but secure in the knowledge that even if we were we'd still have the love of each other, and things would still be okay.

We are also extremely happy to count our family and friends among our many blessings.

Here is a link to this year's holiday newsletter.
Posted by Todd Tarpley at 10:00 PM 1 comment: Links to this post 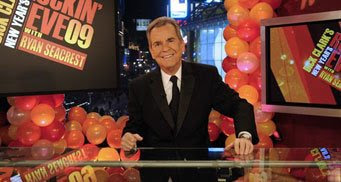 Avoiding you? You didn't get my messages? No, I've been trying to reach you all week, buddy.

Noo--no, no,no. Well, apparently our communication lines got crossed. What would New Year's Eve be without Dick Clark, right?

Well, not exactly, Dick. See, as we discussed with your agent, it's best if we simply flash your likeness at the top of the show and coming into and out of the breaks. So you don't have to get out in the nasty weather this year, Dick. It's gonna be--

No, okay, okay. I hear you, big guy. Uh-huh. Okay, so how about this? 10:30pm--Ryan interviews Lionel Ritchie about the first time he appeared on American Bandstand. And we show some clips of you. You know, Dick Clark in his prime. The good old--

Yes, you still got it, baby. You still got it. Okay, so...live on camera. Great idea, Dick. Picture this: Ryan rings in the New Year. Ball drops. Confetti. Celebration. Then, right after the 12:20 commercial break, we come back and we've got a brief shot of you waving to the camera, to all of America, and we do a little chyron under you. What do you think of this? "Dick Clark, the Original American Idol." And then you wave, and 3-2-1, we're back to Seacrest.

Well, the thing is, Dick, before midnight everyone is, you know, it's a younger feel, people are looking forward, and it wouldn't be fair to Ryan to--

No, Dick, ha-ha, I won't tell him that, but that's very funny. Yes, I get it--his one-day beard would chap it all right. But, seriously--

Dick, you're absolutely an inspiration to others, I'm not disagreeing with--

(Screaming can be heard on the other end of the phone)

Yes, Dick, I'm repeating after you: for a full hour leading up to midnight. Got it. Wouldn't have it any other way, Dick. See you tomorrow night, buddy. The car will be there at 8.

Bob? Dick Clark is in. Yeah, sorry. No, we won't tell the sponsors. We'll just have to give them some extra spots in "Ugly Betty" next week.
Posted by Todd Tarpley at 10:09 AM 1 comment: Links to this post

Samuel:
Pulse Kick'n'Go Scooter ("You don't have to push it off the ground. You push a pedal on the back to make it go.")

My Japanese Coach for DS ("It teaches you Japanese.")

Ethan:
King Arthur Battle Motion Castle ("The characters have sword fights by themselves.")

Nintendo DS ("I didn't think I was going to get this until my birthday.")

Club Penguin Elite Penguin Force DS game ("You're an agent but you do missions that no other agents do. They're top secret.")
Posted by Todd Tarpley at 8:27 PM No comments: Links to this post