Hottest female singers of the '70s

I was trying to distract Jennifer the other night by playing an ABBA video on YouTube. It worked. She stopped what she was doing and started singing along.


She then made the comment that the lead singers were "pretty hot." (The women, not the chipmunk-looking guys.)

I told her that I was uncomfortable perpetuating society's obsession with physical beauty by participating in a discussion about "hotness" (and furthermore, that I didn't appreciate the low-angle shots that revealed way too much of the performers' upper legs).

"But," I added, "if someone really shallow were to compile a list of the 'hottest'--as you say--female singers of the '70s, the women of ABBA would not be among the top five."

"I hate to make you uncomfortable," she said, "but if you were forced to make such a list--much as it goes against your moral grain--who would be on it?"

#1: Olivia Newton-John. Tell me about it, stud.

#5: Susan Dey from The Partridge Family. I'm not sure if she really counts as a singer, but it was between her and Maureen McCormick from The Brady Kids.

Posted by Todd Tarpley at 11:50 PM No comments: Links to this post

I hope I have Ms. S. next year 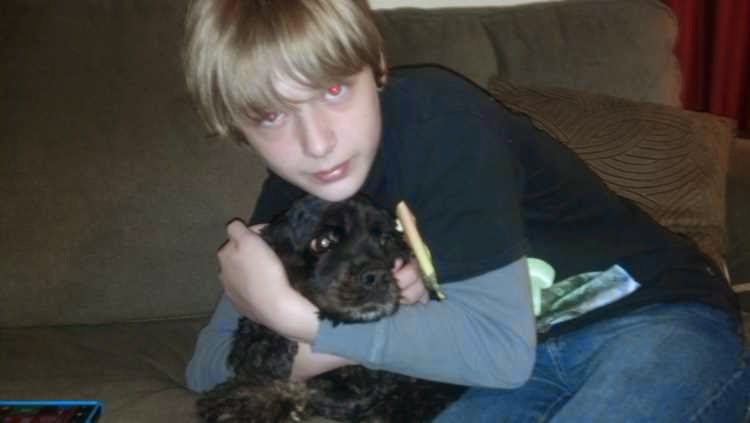 Ethan: I hope I have Ms. S. for a teacher next year. All the sixth-graders say she's bad.

Todd: Wait--she's bad, but you hope you have her?

Ethan: Uh-huh. She used to be a kindergarten teacher, so she treats everyone like they're six. She goes over everything really slowly and has low expectations.

Ethan: Exactly. Plus, sometimes she gets mad at the wrong people. Like one time Aaron kicked Dominic, and she got mad at Dominic.

Todd: You could use that to your advantage.

Big, exciting events of the past week

Pookie the evil housecat has a kidney stone, which means he's meowing all the time and peeing on various things around the apartment. Unfortunately, the vet says he'll recover. 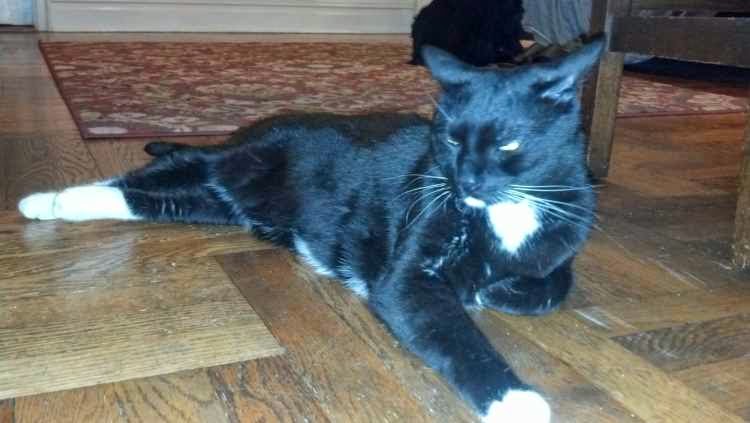 Jen went to visit her mom and dad in Illinois for a few days, which gave me the opportunity to clean out the freezer and replace all the year-old frozen meat with a few essentials. 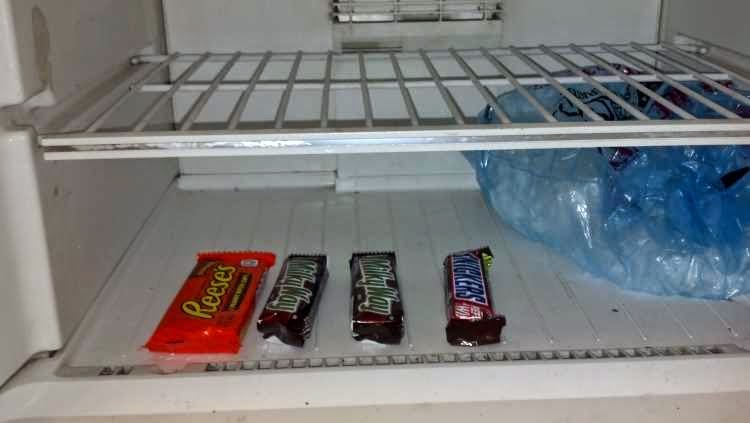 While Jen was gone, I took the boys to Camelbeach waterpark for Father's Day. It was only 80 degrees, so it was a teensy bit cold in the wave pool. On the other hand, there were no lines.

We bought season passes last August when I was still gainfully employed, and they last through this summer. So our "summer vacation" will consist solely of going to Camelbeach multiple times. I know...first-world problems. 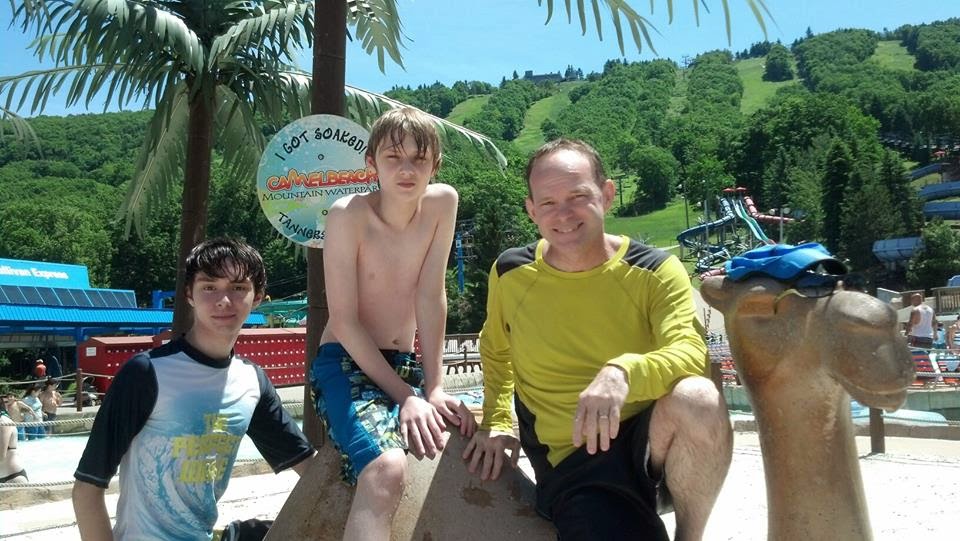 Jen is back from Illinois. Ethan has been on his laptop non-stop since school ended last week. Samuel has a cough and fever and is spending the weekend recovering.

I'm awaiting feedback on a couple of picture book manuscripts, interviewing for jobs, and trying not to stress about finances.

So there you have it.
Posted by Todd Tarpley at 3:47 PM No comments: Links to this post 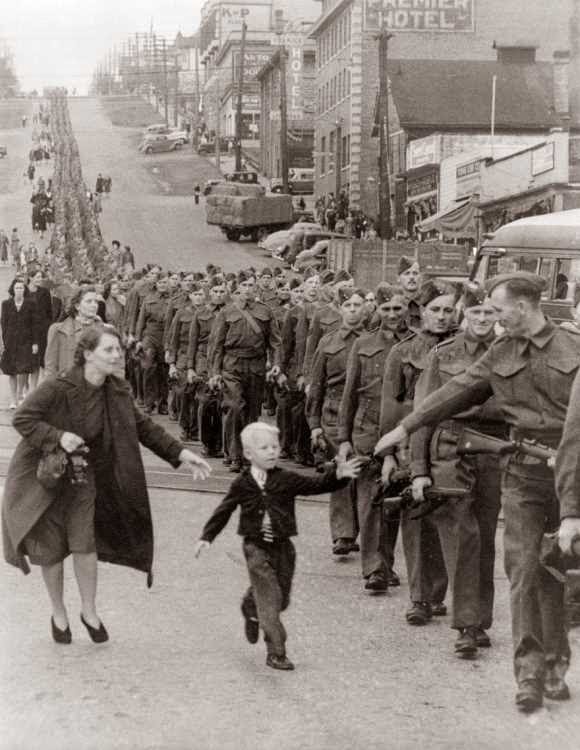 Posted by Todd Tarpley at 10:20 PM No comments: Links to this post

Jen is in Illinois visiting her parents, so we're having a karaoke party at the apartment tonight.


Well, technically, it's just me and Bailey.
Posted by Todd Tarpley at 12:17 AM No comments: Links to this post 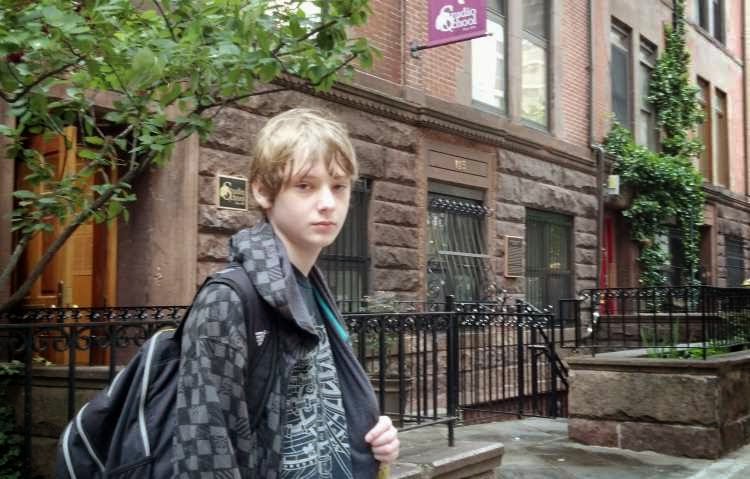 No more seventh grade. You can see how excited Ethan is about it. (He actually is.)

This was the school year that Ethan stopped holding my hand. That was already on its way out two years ago, but I did take notice in the fall when he grabbed my hand one morning, and I sensed at the time that it would be the last time that would happen, at least until I'm very old.

That's okay. It would seem weird for a thirteen-year-old to hold hands with his dad. But if he ever wants to, I'll still be here.

Occasionally now he touches my shoulder, bumps up against me playfully, or hangs on me a bit. That's the new sign of affection. I'll take that.

This was the school year that Ethan turned thirteen. I'm now in a short, four-year window in which I have two teenagers. No tweens. No single-digiters. Toddlers are a distant memory. I'd still take a few more; you know that.

This was the school year that Ethan's voice changed. He got taller. He started talking about girls. He became less anxious, more confident. I think. Maybe it's an act.

Look how much he's grown in nine months: 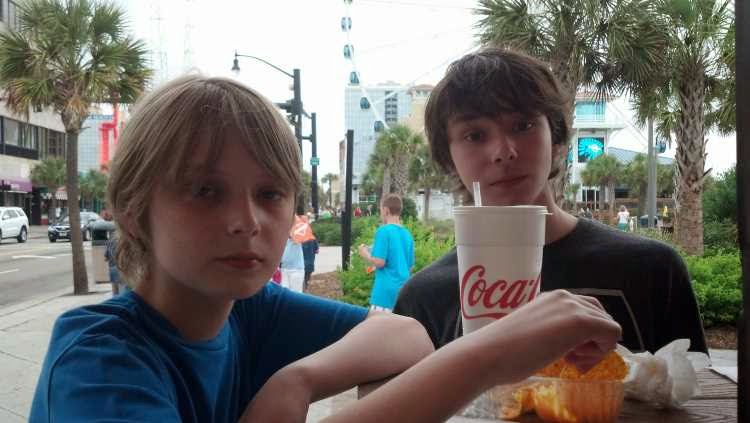 It just keeps rolling on, doesn't it?
Posted by Todd Tarpley at 5:44 PM No comments: Links to this post

New kids on the block

You know you're getting old when you refer to places by what they were ten years ago. 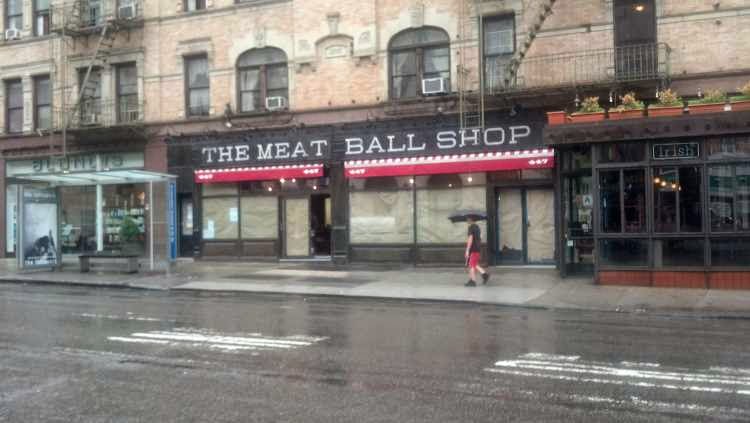 Case in point: to the untrained eye, the photo above looks like a new restaurant on Amsterdam called "The Meat Ball Shop." But it is actually "EJ's" (or "the new EJs" or "the place that used to be EJ's"), because that's what it was when Samuel and Ethan were little and we had happy memories of milk shakes and pancakes and kids menus and crayons. Phooey on The Meat Ball Shop. Change is bad. 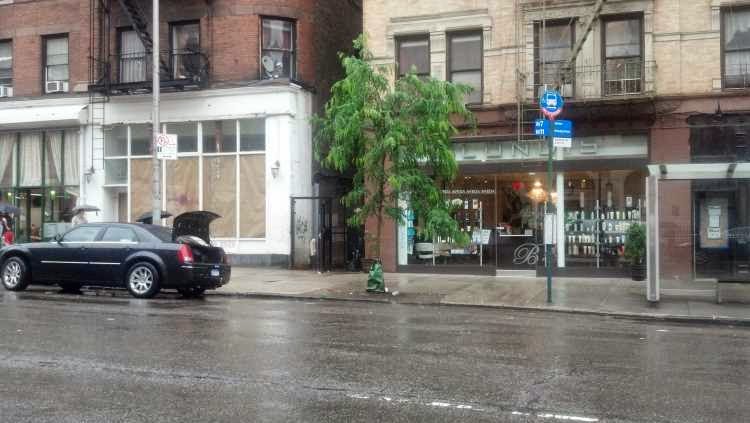 The nail salon behind the bus stop? That's "the place that used to be Silk Road Palace," the Chinese restaurant that gave away free wine. It had crowds of people outside on Saturday nights waiting for a table.

The vacant white storefront on the left? It's "the place that used to be Burritoville." When Samuel was little he and I used to climb along the lower window ledge to see if we could make it without having to step on the sidewalk. Did they mind having our handprints all over their windows? Nahh. They loved us. 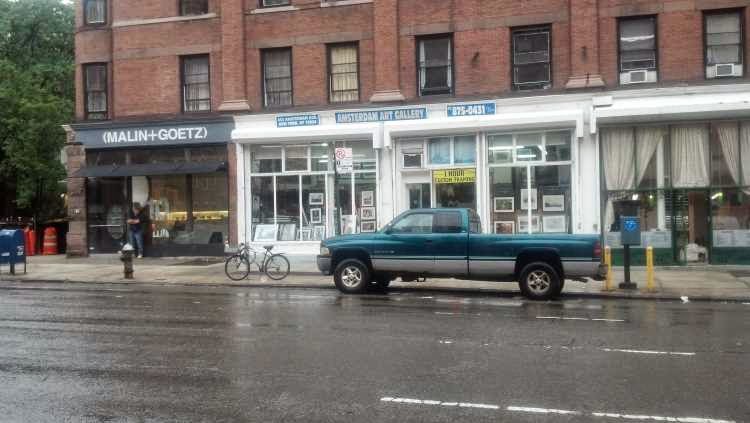 The photo framing place hasn't changed since 1998. When Ethan was little he attempted to sell his hand-drawn picture books to passers-by on the sidewalk. He had limited success until the owner of the framing shop came outside and bought four. Hurray for the old neighborhood. 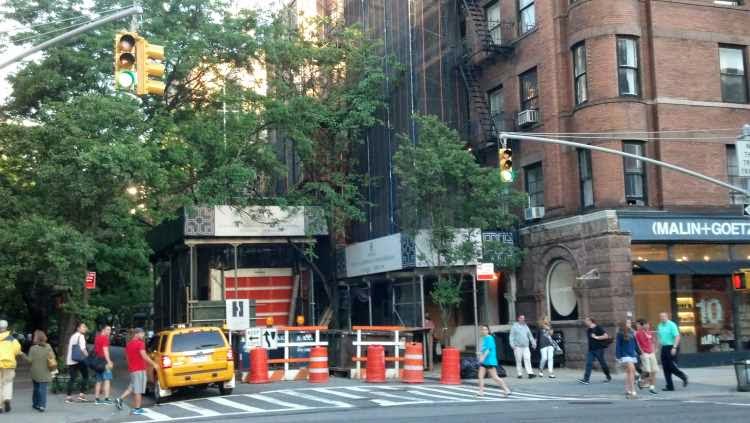 While we're on the topic, here's a look at the soon-to-be "eleven luxury condos" under construction on our corner. It was previously a tenement, and it sat vacant for a couple of years during the recession. I doubt I will ever refer to it as "the place that used to be the tenement where the crazy old lady fed pigeons and attracted rats." Hurray for rising re-sale values and quality of life. Hurray for change.
Posted by Todd Tarpley at 7:01 PM No comments: Links to this post

How to feel young 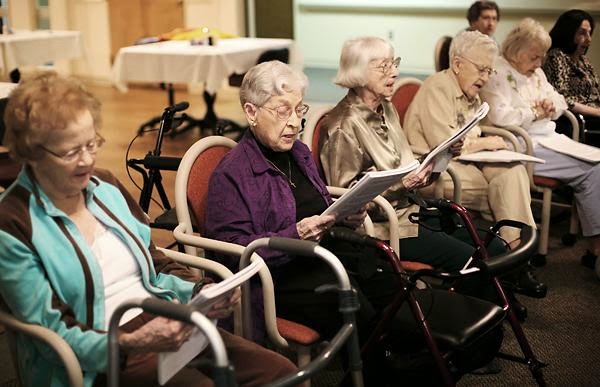 Most people mistakenly think the way to feel young is to be around young people.

The way to feel young is to be around old people.

I drove up to Connecticut this week to visit the retired couple (ex-professors) for whom I was a graduate assistant at Yale twenty years ago. They live in a retirement home near New Haven. He recently turned ninety.

As far as retirement homes go, theirs was quite nice.  Yeah, it kinda smelled like old people. Yeah, all the chairs had wheels on the bottom of the front legs so that when you sat down you could easily scoot your chair up to the table. Yeah, it was creepy in a way that all retirement homes are.

But it was good to see them. If you have to get old--and God willing, we will--they have done it pretty well. Too bad there's no future in it.

We chatted for a while about names and places none of us could remember clearly, we had dinner in the dining room with about fifty other old people, then we said goodbye and I drove back home.

But as I pulled out of the parking lot, I looked in my rear-view mirror and briefly thought, "Holy crap, I look twenty-nine."
Posted by Todd Tarpley at 1:17 PM No comments: Links to this post 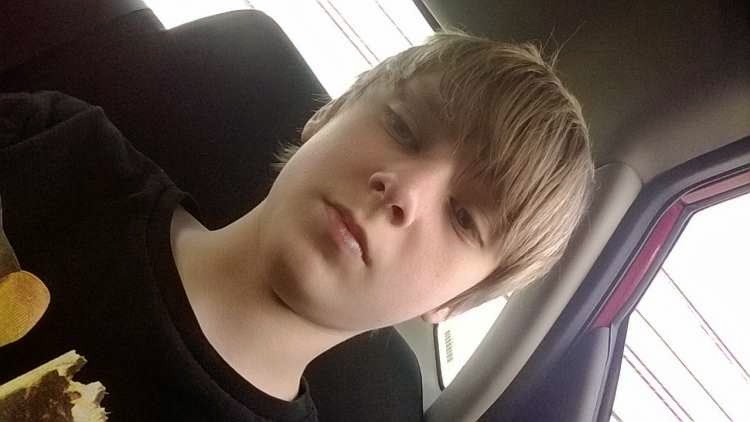 Did you know that your navel is a bacteria farm?
Posted by Todd Tarpley at 7:59 AM No comments: Links to this post