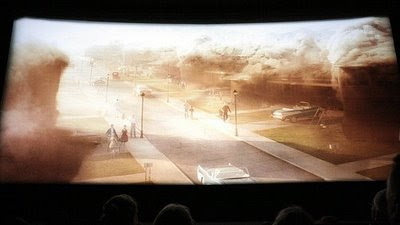 So, in case you're the last to hear, the Internet is abuzz with movie fans who are so upset with the atomic bomb scene in "Indiana Jones" (in which Harrison Ford escapes a nuclear blast by hiding in a lead-lined refrigerator) that they've coined the term "Nuke the Fridge" to refer to a plot point in a movie that is so asinine that it ruins the entire movie.

It's akin to "Jump the Shark," the buzz word coined back when Fonzie jumped a shark on water skis in the TV series "Happy Days." 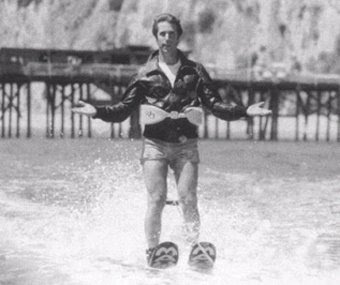 The interesting thing about the scene in "Indiana Jones" is not whether it was any less realistic than, say, being dragged under a speeding truck by a whip, experiencing dramatic ambient lighting in an underground cave, or finding Karen Allen attractive at age 65.

The interesting thing was that it was based on an actual event. Here's a quiz (or "nuclear test," if you will):

True or False: There really was a nuclear test that took place in the Nevada desert in the 1950s and involved the destruction of houses and mannequins.

Answer: True. Operation Cue took place in 1955 (not 1957) in the Nevada desert. The test was designed to test the effects of a nuclear blast on several different types of building structures as well as food, clothing, and even, to some degree, people (represented by mannequins). 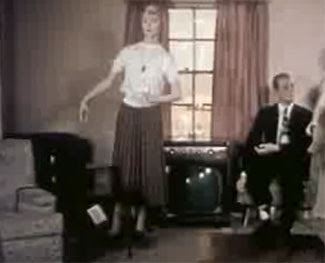 True or False: The bomb blast took place near "Area 51," a secret military base with a hangar that supposedly housed the remains of an alien.

Answer: True. Ground zero was about 15 miles from the place commonly known as Area 51. The secrecy surrounding Area 51 was due to the fact that it was used in the '50s for testing of the U2 spy plane. That's what one of its hangars contained. The old hangars still exist, but none is nearly as large as the gargantuan warehouse depicted in the "Indiana Jones" movie. 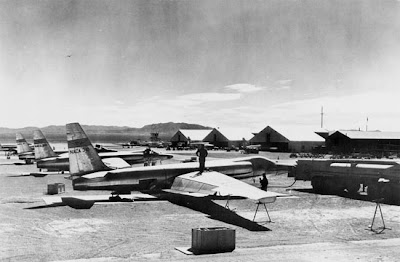 Answer: False. It took place at 5:10am. The only light was from the atomic blast itself, which makes the video of the event all the more eerie. 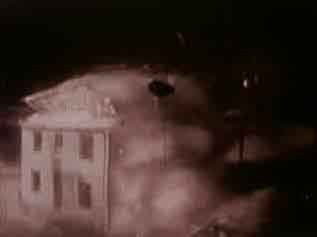 Tue or False: The experiment involved the construction of an entire suburban town, complete with paved streets and an ice cream vendor.

Answer: False. But wouldn't it be cool if it were true? In reality, it involved the construction of only a few structures made of various materials, located at varying distances from ground zero. 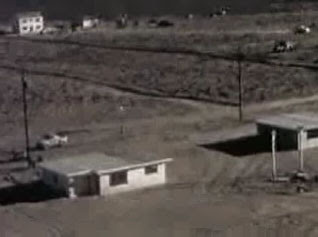 It also involved the placement of several vehicles and mobile homes. Mannequins were placed inside some of the structures, as well as out in the open at about 2 miles from ground zero. No paved streets. No ice cream vendor. (There was a refrigerator in one of the homes, seen below in a still frame from the 1955 government film.) 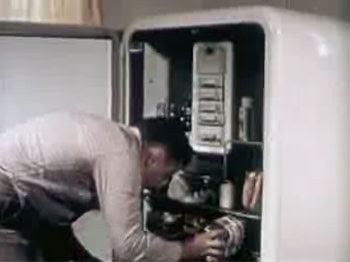 Alas, it would not have been mistaken for a suburban town, either from a distance or up close. 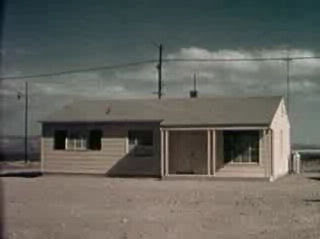 True or false: you can see the remains of the test site on Google Maps, with the mile-circumference scorched desert still faintly visible.

Answer: True! How cool is this?? 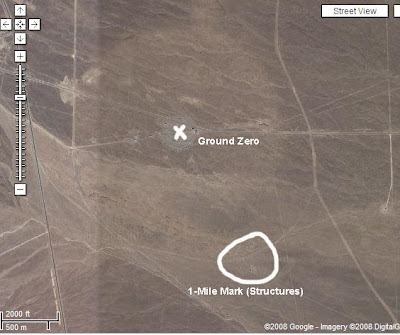 Here is the map from the government film showing the location of the structures at the mile, 1.5-mile, and 2-mile marks. Compare to Google Maps. (There are no longer structures visible at the 1.5-mile mark.) 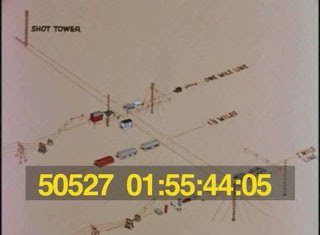 Zoom out a little further and pan to the east and you'll see a heavily cratered bomb-testing area from the late '50s; it looks like the surface of the moon. Pan another 10 miles northeast and you'll see Area 51, identifiable by a white lake and airstrip. 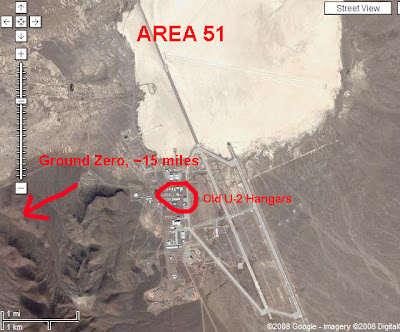 True or false: The atomic bomb scene in "Indiana Jones" was so unrealistic that it "nuked the fridge."