We drove out to Riverhead, Long Island on Friday evening to join some friends from school for a night at the Hyatt.

We ate sushi and pizza, then the boys (four of them, woo-hoo) and I explored the pool while the rest of the adults were--well, who the hell knows or cares?

At the pool we were joined by three more girls, so we had quite a rocking pool party.

We compensated for the lack of a Jacuzzi by heating towels in the shower. 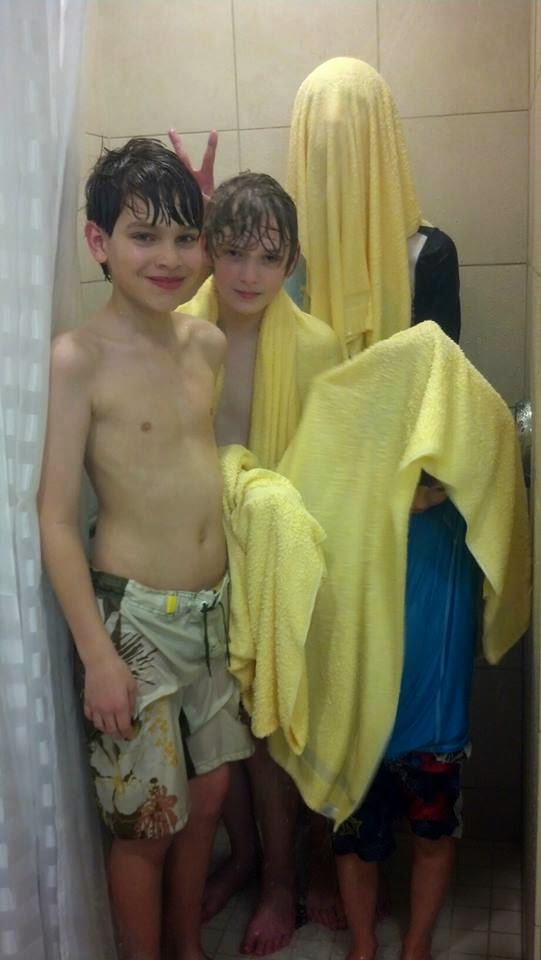 The next day the boys and I dropped $20 at a crappy arcade, then we stopped for ice cream on the way home. Oh, and we bypassed the barriers and snuck into the parking lot at the closed-for-the-season Splish Splash waterpark, just to say we did. I'm too old to want to attract the police, so that was as mischievous as we got. 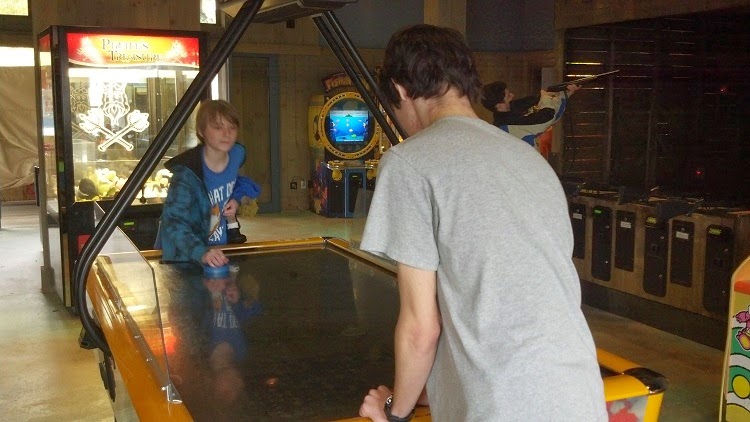 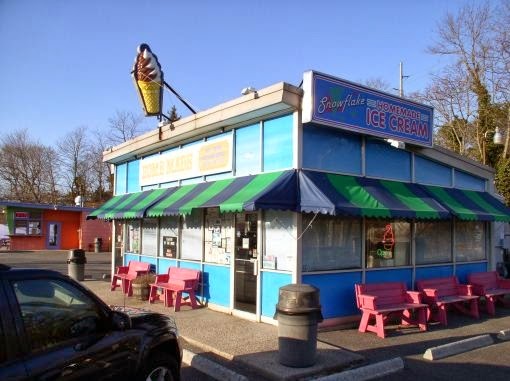 I needed a little fun and distraction from the harsh realities of life.
Posted by Todd Tarpley at 12:28 AM 1 comment:

Just me and Samuel 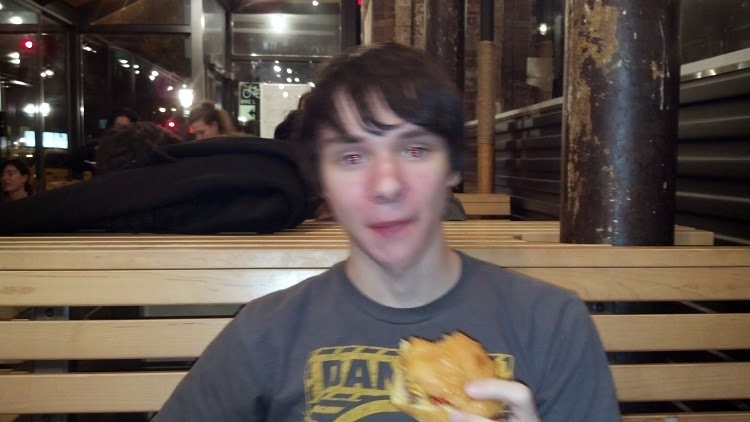 Jen and Ethan left yesterday for a weekend retreat in Long Island. Samuel and I are joining them tonight.

Last night Samuel and I had the city to ourselves, so we took advantage of it by having dinner at Shake Shack.

Samuel had a big presentation at school earlier in the day, which he said went well. He was tired from staying up so late. He said it is School Spirit Week, culminating today with some sort of athletic event in the gym, for which each class has to wear its own color. Sophomores are wearing green. I asked him if he even has a green shirt. He said yes, his Minecraft Creeper shirt.

There's nothing like a Shake Shack burger and a boy you love.
Posted by Todd Tarpley at 10:25 AM No comments:

Feedback on the latest manuscript revision was good--the editor wanted a few more changes and additions. I made them. The new draft is going back this week.

My weight is down to 140 for the first time since 2011. It's been hovering around 144 for the past couple of years. I ran a 6:15 mile this weekend for the first time in a long time and felt okay. It feels good to have all the muscles, joints, tendons and ligaments cooperating. I used to take that for granted.

The Iowa Hawkeyes took fourth at the NCAA Wrestling Championships--fourth straight year without a title, and it was Penn State's fourth straight win. Why do I care about such things? I just do. I will always be a Hawkeye.

The worse news that I'm avoiding talking about:

I got laid off from my job. The one that pays the bills.

I don't take it (too) personally. Digital media is a tough business, which is also what makes it exciting--not to mention what makes good execs valuable.

I'm in a digital media exec group that meets for breakfast once a month; it's filled with extremely bright people with Harvard MBAs and impressive job titles. I think every person in the group has been laid off at some point during the past four years. Things always work out if you have marketable skills and a track record of not being a complete a-hole.

But it's not an enjoyable experience. It's stressful going through the process of finding a new job while the clock is ticking. 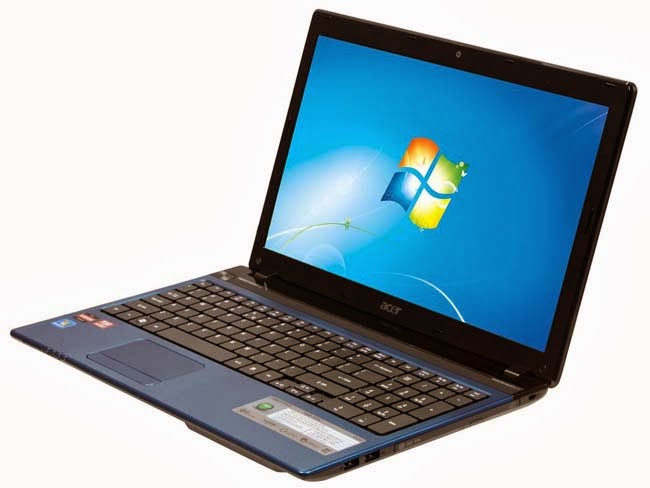 I basically spent the entire weekend staring at my laptop, alternating between doing revisions on a manuscript and obsessively trying to figure out what happened to that damn Malaysian Airlines flight. I get like this sometimes.

I like doing revisions. I like them, first of all, because I'm narcissistic and I enjoy re-reading my own work. I mean, you know, it's good to read something you wrote six months or a year ago with a fresh set of eyes and get a sense for what worked and what didn't.

I like doing revisions, second of all, because it means an editor is interested enough in a manuscript to ask for them. That's exciting for obvious reasons. Gotta have irons in the fire.

I like them, third of all, because editors tend to have pretty good ideas about how to make a manuscript better. Despite my narcissism, I tend to hold children's book editors in pretty high esteem. As long as it's still ultimately all about me.

I did manage to go for a run in the park on Friday evening (in daylight!), have brunch with Jennifer at Nice Matin on Saturday morning, buy paint at the hardware store with Samuel on Saturday afternoon, walk the dogs to the deli with Ethan on Saturday night, go for another run this afternoon, and have a sushi dinner with Jennifer a few hours ago at Haru.

The biggest non-Todd news over the past week:

Samuel got new 3D virtual reality goggles called Oculus Rift. He was up until 3am last night. Of course, now, at midnight on Sunday night, he's frantically trying to finish his homework for tomorrow morning. 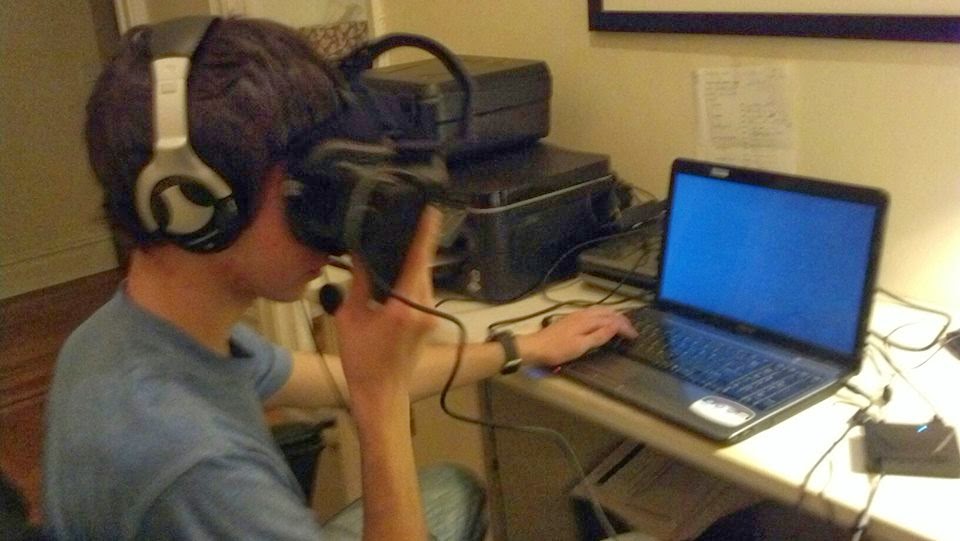 Also, we finally got rid of our shabby old dining table that we've had since 1990--it was so shabby that when we put it outside by the curb, no one took it. We replaced it with an antique Arts and Crafts oak table that looks great with our Mission chairs. Every fifteen minutes I walk through the living room and remove whatever books or coats or bags or papers have been placed on the table by family members who are not as enamored of it as I am. Ah. 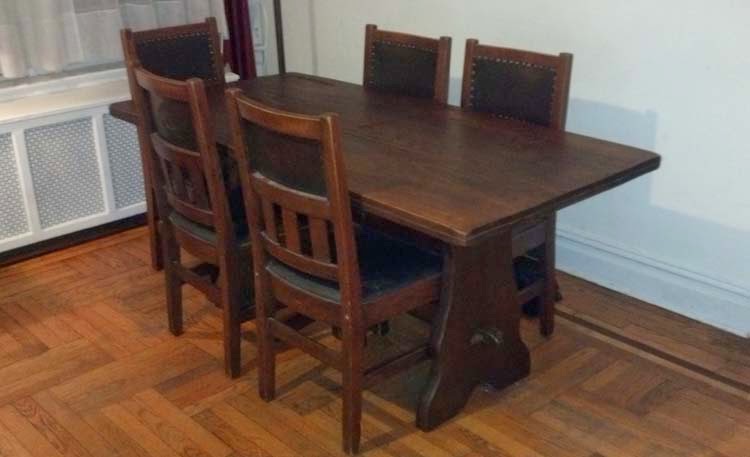 Posted by Todd Tarpley at 12:11 AM No comments:

My 10-week career as a radio DJ 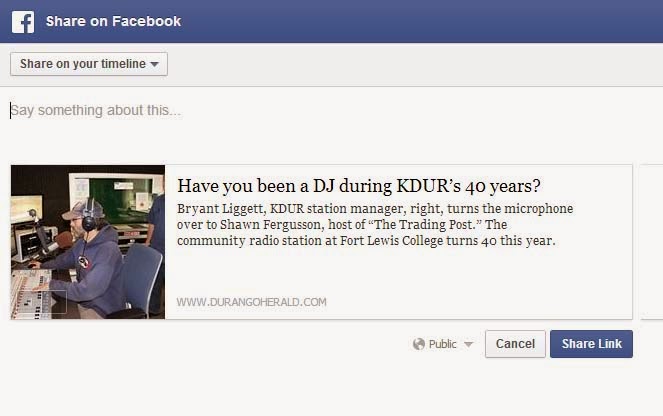 I had the early Wednesday morning timeslot on KDUR in the summer of 1981. It would've been called "drive time," but in Durango there was no commute.

I was eighteen and home between my first two years of college. I had a paid gig ($3.35 an hour) at KIUP-AM, Durango's "real" radio station, where I wrote and produced local commercials. (Perhaps you remember my series of :30 ads for Durango Travel Service? No?)

The KDUR gig was unpaid, but aside from that it was the perfect job. The station manager had left for the summer, the campus was empty, and I had the run of the place. I could blitz the airwaves with my own brand of creative self-absorption, with no repercussions. And when I say blitz the airwaves, I mean within the five-mile radius that our signal extended.

I started every show with a pre-recorded skit, the crux of which generally had something to do with how great I was--Brooke Shields calling to plead for a second date, for example, or an interview with amateur gynecologist Rod Snarpley (an impressive feat of overdubbing).

I had access to sound effects, musical stings, and jingles from KIUP ("It's Wednesday!" "Sen-sa-tion-al!"), which I used liberally. And in between playing top-40 hits by Foriegner, Journey, and REO Speedwagon, I took "live phone calls" from my avid fan base of "listeners" (i.e. pre-recorded calls between me and my friends).

Because DJ coverage was spotty in the summer--and because I had keys to the studio--there were occasional nights when, realizing at 10pm that no one was on the air, I'd make a beeline for the station, unlock the door, fire up the board and have fun for an hour or two.

Alas, I was destined not to have a career in radio. I headed back to college at the end of August, and that was that. I had one more radio job the following summer, where I read the weather report for the top-40 station from midnight to 6am ("This is Todd Tarpley from the KIQX Weather Center"), but the creative possibilities were more limited. Brooke Shields never called.

In retrospect, those ten weeks at KDUR were an awful lot of fun. It paid almost as well as children's book writing. And if I can ever find that old cassette tape of my on-air skits--not to mention a way to play it and digitize it--I just might have to post a few and re-live the glory days.

Review of Disney's "Fantasia" by Ethan

We watched this old Disney movie, but there was no dialogue. Just classical music. The first segment was just these weird lights flashing around in the sky. Next one was a bunch of these naked fairy things flying around in the forest and, like, changing the seasons. And suddenly it just showed a bunch of dancing fruit for like twenty minutes. The last one was so weird. It basically looked like the old version of My Little Pony. There were unicorns and stuff, and this little paperboy comes in and tries to scare this horse. For ten minutes it was just these three little baby pegasi swimming and flying around. There were these naked babies flying around and they didn't have any private parts. Then these two big pegasi who might have been their teachers or parents or the king and queen were helping them through it, then after that it showed all these naked girls in a pond brushing their hair and, like, showering in the water. No one had any nipples.
Posted by Todd Tarpley at 7:12 PM No comments:

This is the first picture of Ethan at age 13. 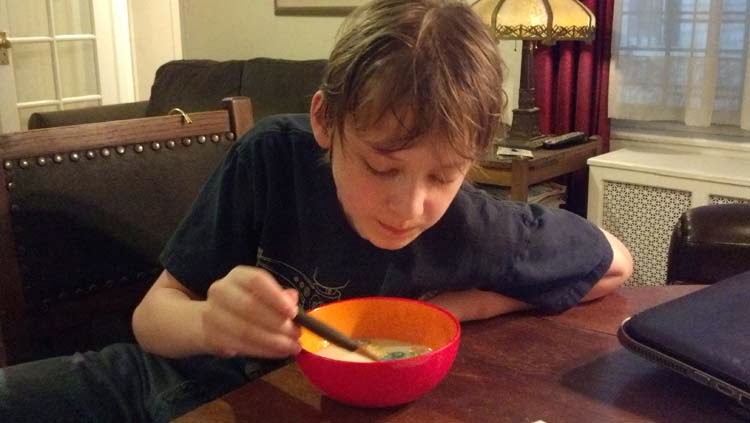 He was explaining the differences between the content rating systems for TV, film, and video games. That was shortly before he told me that when dogs sniff each other's butts, to them that's like Twitter.

Here is Ethan at age 3, doing an interpretive dance.

And this is Ethan blowing out the candles on his birthday donut today.

Never a dull moment.
Posted by Todd Tarpley at 5:26 PM No comments:

Do you remember how we finally got rid of our piano a few months back? It had been sitting, un-played, in our foyer for several years, buried under keys, coats, boxes, bags, and dog leashes. It was our version of Grey Gardens. 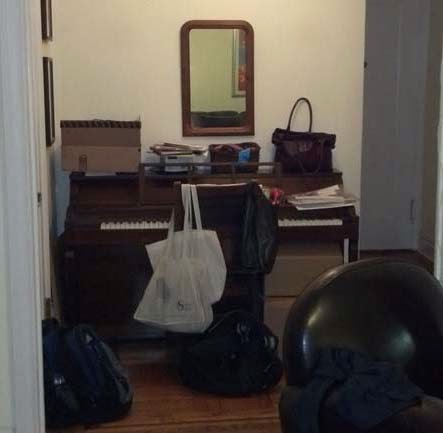 There was a brief moment of de-clutter in December, when it looked like Whoville after the Grinch came. 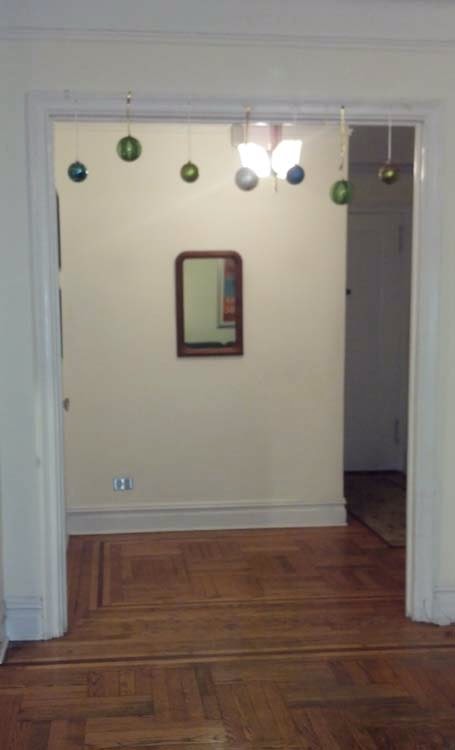 Jennifer and I finally agreed on a replacement: an antique, leaded-glass bookcase only two-thirds the size of the piano. You can't play it, but because it's a bookcase, it can also hold dog treats, dog shampoo, dog food, spare light bulbs, old picture frames, candles, greeting cards, scissors, tape, and old letters, receipts, and tissues that Jennifer has not thrown out. Theoretically, it could also hold books, but let's not go crazy. 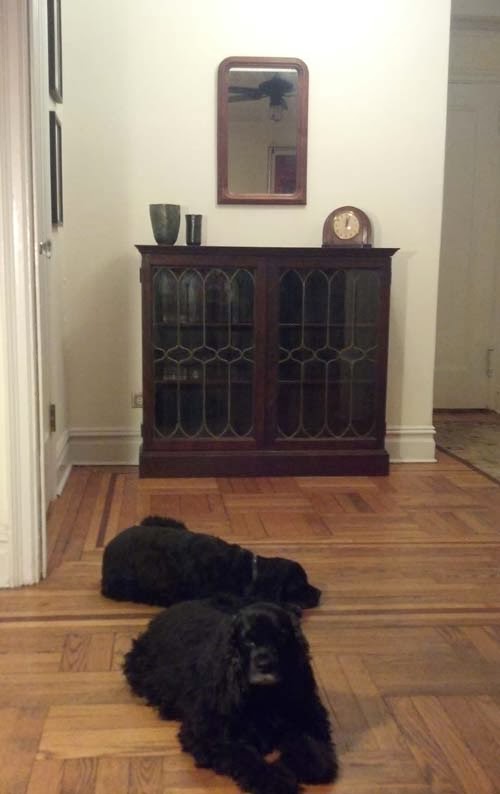 I won't go into all the details of how we got it, but it involved bidding online, renting a cargo van to pick it up in Philadelphia, arriving at 6:08pm on a Friday evening when the auction house closed at 6, and paying the guy an extra $40 to allow me to pick it up anyway, thereby saving me an extra trip from NYC and the cost of another van rental.

Take a good look, Bailey and Kahlua: the foyer is perfect now, but this is as uncluttered as it's ever going to be again.
Posted by Todd Tarpley at 1:06 AM No comments: