We should start off with the obvious, which is that Samuel graduated from high school. 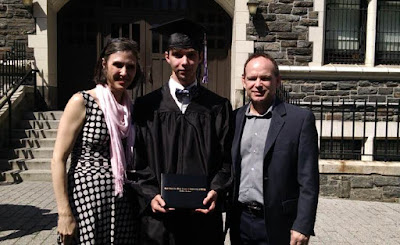 They should hire someone like me to do these graduation ceremonies. I'd have people in and out in an hour.

My freelance gig got extended, which from a financial point of view was an important event. Our mortgage will be paid for at least six more months.

I signed a contract for a new book, which was quite important psychologically, though not so much financially.

And, not to mix the small with the big, but I finished a manuscript revision this weekend, I had a good run in the park this morning, and Samuel and I finally fixed the two towel racks that had come loose from the bathroom walls six months ago. Never underestimate the psychological impact of sturdy towel racks. 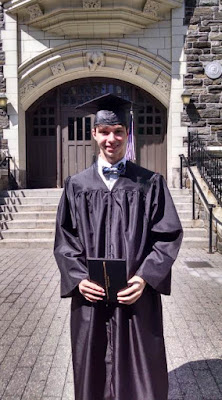 Posted by Todd Tarpley at 12:19 AM No comments: 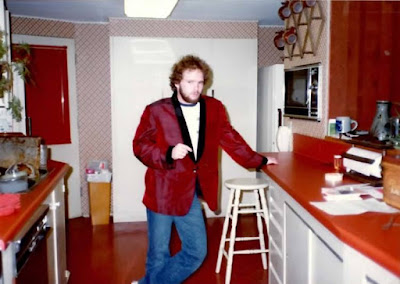 This is quite possibly the most hideous picture of me ever taken. Which is probably why my mom sent it to me.

I was home on spring break from Arizona State. My freshman year was not going as expected.

I had enrolled too late to get a dorm room, but I found out that if you participated in fraternity rush week but didn't join a fraternity, you were guaranteed a dorm room.

That seemed like a great loophole, so I spent rush week in Tempe drinking beer and dancing to "Rock Lobster" and doing drunken Marlon Brando impressions and making out to Air Supply and thinking college was going to be the greatest experience of my life.

This is an actual photo of an ASU frat party in the 1980s: 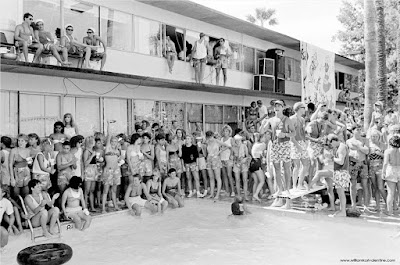 I quickly realized that unless I joined a fraternity I was going to be living in the nerd dorm with all the losers who didn't get an invite. So I pledged the Phi Delts. The jocks.

Turns out ASU wasn't for me. Rush Week was the high point. After that it was hazing and secret handshakes and staged photo ops. Group embrace? Check. Holding alcoholic beverage? Check. Obligatory Gilligan's Island theme? Check. 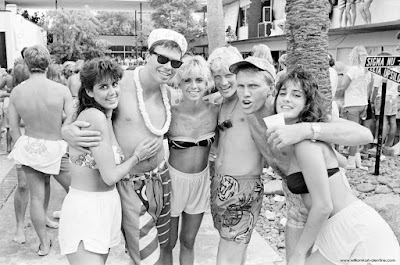 The biggest disappointment: sorority girls weren't as into my Marlon Brando impressions as I initially thought. 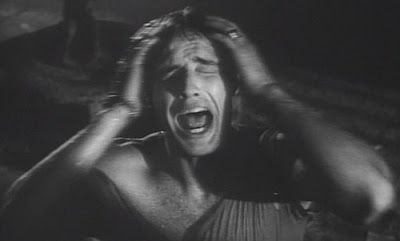 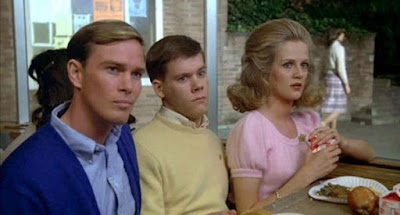 My 3-month Don Henley phase was simply my way of saying "F-- you, I'm not in the Omegas," and trying to figure out who I was going to be next.

Samuel is now the same age as I was in that picture. He has a more solid core than I did at 18, which is encouraging. He could probably grow a better beard. I cannot for the life of me imagine him doing a drunken Marlon Brando impression. I don't think he is familiar with Air Supply.

But he'll have his own challenges and regrets and defeats and victories.

As for me, eventually I transferred to NYU film school. The first week there, "A Streetcar Named Desire" was playing at the Bleecker Street Cinema, and I smiled and said "Stella!" under my breath.

Posted by Todd Tarpley at 12:58 PM No comments: 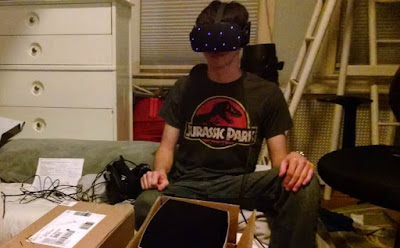 Todd: First, welcome to the blog.

Todd: As you may recall, I got an alert from PayPal a couple of days ago that said thanks for my payment of $599 to Oculus VR. So I came home and said, "Samuel, did you buy something from Oculus VR for $599?" You said, "Oh, that's my Oculus Rift!"

Todd: So let's start with, What is an Oculus Rift, and why did you want one?

Samuel: It's a Virtual Reality headset that allows you to feel like you're in a virtual space. I wanted one because I've always been fascinated with being able to create fake things and make them feel real...similar to theme park rides.

Todd: This is not your first one, though.

Samuel: A few years ago I got the first developer kit. It was for people who were developing games for virtual reality.

Todd: And what happened to that one?

Samuel: I kept that one until the second development kit came out, and then I got the second one. I sold the first one on eBay.

Todd: Did you make a profit?

Samuel: Yes. About a hundred dollars.

Todd: How was the DK2 different from the DK1?

Samuel: DK2 had a screen that was specifically designed for virtual reality, so there was less of a pixelated effect on the screen, and less of the things that can go wrong on an LCD screen. More important, it had motion tracking, which means it came with a camera, and there are infrared LEDs embedded in the headset so it can track if you're moving not just up and down but side to side.

Todd: Do you still have the DK2?

Todd: So, as you know, the day after I got the first alert from  PayPal I got another alert from PayPal. It said thanks for my payment of $599 to Oculus VR. I said, "Samuel? What's going on?"

Samuel: I realized I had accidentally ordered two.

Todd: So how will this story end?

Samuel: We're probably going to send back the second one or sell it on eBay.
Posted by Todd Tarpley at 12:06 AM No comments:

More photos from my mom.

This is me approaching the finish line at the Pikes Peak Marathon in August 1979. I went with my high school cross-country teammates, Skip Garcia and Chris Ekstrom. It was right before the start of my senior year. I was 16. 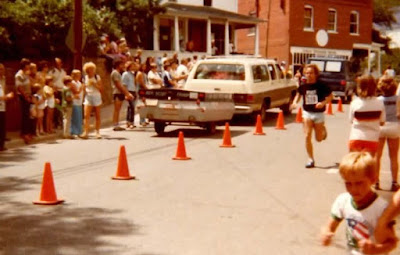 The first half of the race was up a 14,000-foot mountain, and the second half was back down. You could run one way (up) or both ways. The previous year I'd just run to the summit. 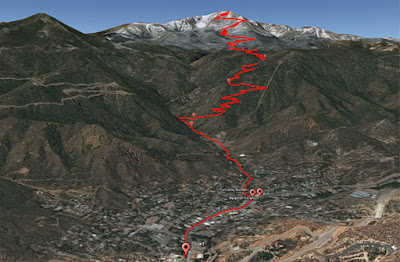 I wasn't sure when I started this race whether I was going to go both ways. But Ekstrom--the guy in the blue warm-ups in the photo below--beat me to the summit by two minutes. He got an early lead. I was certain I'd catch him.

When I didn't, my only option was to turn around and head back down the mountain, as if that had been my plan all along and I was simply pacing myself. 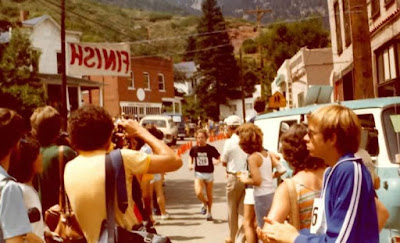 It's hard to see in the photos, but I'm wearing my new "F--k" t-shirt, which I'd bought a month earlier at the Pink Pussy Cat Boutique in Greenwich Village. You certainly couldn't buy a "F--k" t-shirt in Durango. So I already knew that I wanted to live in New York City.

Looking back, I was in a pretty good place. I was having a good summer, a good year. I had a girlfriend. I was happy. Most of all, I was at that crucial tipping point between knowing that I wanted something more out of life than staying in my hometown, but still having the security of living there. It's easy, when you stand at the bottom of the diving board, to say you can't wait to jump off.

It's the only marathon I ever ran. I'm kind of glad Ekstrom beat me to the summit.

BTW, I found it on Google Maps: 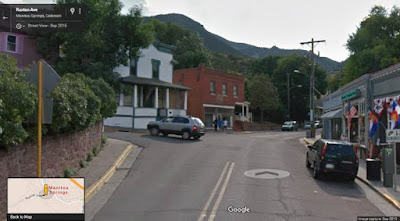 My mom sent me some old photos in the mail last week. I'll add some commentary. 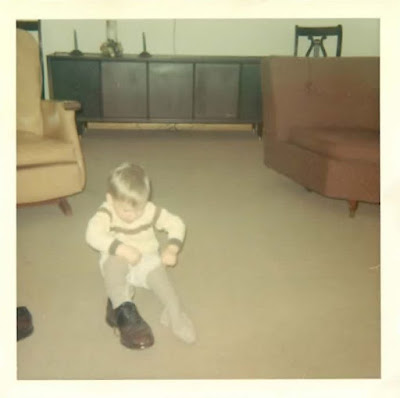 Early 1966. LBJ was President. "Bonanza" was the top show on TV, the Beatles were "more popular than Jesus," according to Lennon, and the US had 200,000 troops in Vietnam.

I was three. I was trying on my dad's shoes in the living room of my Tarpley grandparents' house in Tulsa.

My dad was finishing his senior year at the University of Tulsa, and I think he was working part-time at the telephone company. Were those his work shoes? Or did he wear dress shoes to his college classes? Was this perhaps a post-church Sunday afternoon?

Did my dad avoid the draft because he was in college? Because he had kids? Was he worried about being drafted? I don't know these things and never even thought much about them. It takes an old photo to raise such questions.

There's a mid-century mohair sectional sofa on the right, which looks kind of hip right about now, doesn't it? Behind it is a dining chair--just looked it up on eBay and they're called "lyre back chairs." I remember them well. Judging from the going price on eBay, not a collector's item.

And that's an old stereo console on the back wall...can't figure out the brand. Zenith? Give my grandparents credit for being cooler than I remember--the room is much more "Jetsons" than "Ozzie and Harriet."

My grandparents upgraded a couple of years later--that one had a color TV. We took the old one with us to St. Louis. Here's the smoking-gun photo, from 1969: 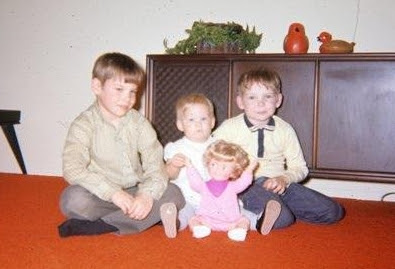 Note that our carpet was groovier than my grandparents'. And those two orange birds successfully brought the old console into the age of Aquarius. There's probably some lime-green macrame plant holders just off-camera.

What a cool family I come from. I say that with 5% irony but 95% sincerity.
Posted by Todd Tarpley at 8:12 PM No comments: 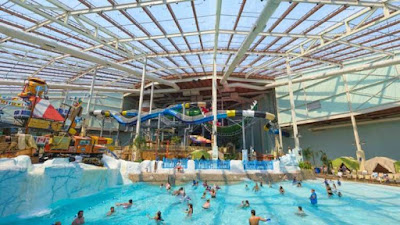 It makes me feel out of sync with the universe not to have experienced every waterpark in the Tri-State area.

Aquatopia, the indoor waterpark at Camelback Resort, has been on my to-do list since it opened last year.

We arrived Friday night about five minutes before the waterpark closed at 10pm. We weren't expecting to go that night anyway, but I was so excited that Samuel and I left Jen and Ethan at check-in and bolted downstairs to the waterpark. The doors were already closed, but two people were coming out the exit, so we slipped in. 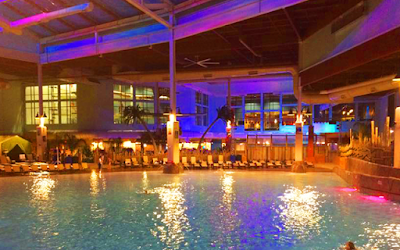 We dipped our toes in the wave pool and I got nostalgic and held Samuel's hand. Just for a second.

Today we spent the whole day at the waterpark.

It's 50% larger than Great Wolf Lodge, and has more teen-oriented slides, so a better fit for us now.

Jen and the boys liked the Venus SlydeTrap, one of those "toilet bowl" raft rides. We all agreed that someone in Marketing tried way too hard to work the word "slide" into "flytrap."

My favorite was the Skydive Plummet, a free-fall body slide with a 60-foot drop. 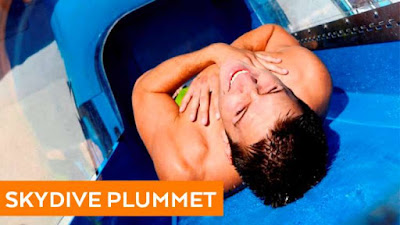 Full disclosure: Hurricane Harbor's speed slide is 76 feet tall, and Mountain Creek's is 99. But it was still unnerving standing on a Plexiglas trap door sixty feet up while the ride attendant said "3...2...1...."

Ethan and I also liked the FlowRider. 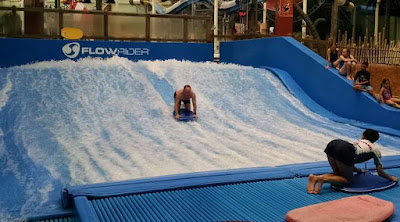 (One of these things is not like the others:) 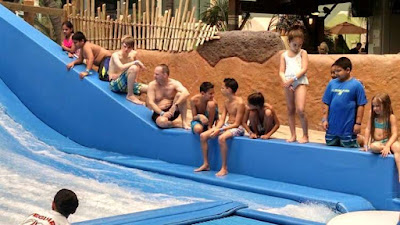 The best part was simply being together with my rapidly aging family before Samuel goes off to college in three short months. 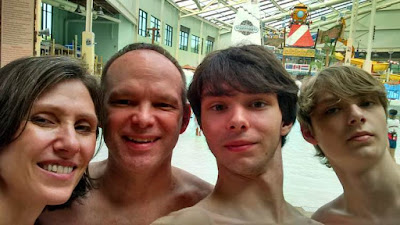 End of an era, baby.
Posted by Todd Tarpley at 1:33 AM No comments: 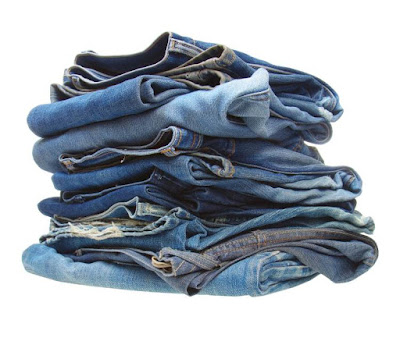 Todd: Folding clothes always takes longer than you think it will.