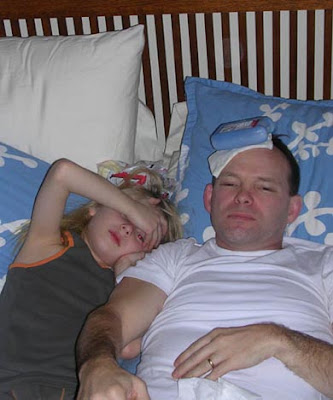 Ethan and I were wrestling on the bed, and somehow we got tangled up and toppled over the edge and both landed right on our heads. We both bonked hard, and I was immediately concerned that Ethan was really hurt, because I knew I'd cracked my head pretty good. Jen and Samuel came rushing in, and Jen went to grab ice packs from the freezer. Meanwhile, I reached up and touched my forehead and realized I was bleeding. Ethan became hysterical, concerned that we both might be bleeding to death.

Apparently we didn't have two ice packs in the freezer, because Jen came back with one ice pack and one frozen package of ravioli, which she applied to Ethan's head. Mine stopped bleeding long enough for us to determine that the cut itself was fairly small but that I'd managed to scrape off the top layer of skin from a wide swath of my forehead. Ethan had a small bump but was otherwise okay. No neck trauma. Jen said something about breaking the fall with my head, and Ethan started giggling.

We recuperated together for a few minutes, then Ethan requested ravioli for dinner.
Posted by Todd Tarpley at 9:14 PM