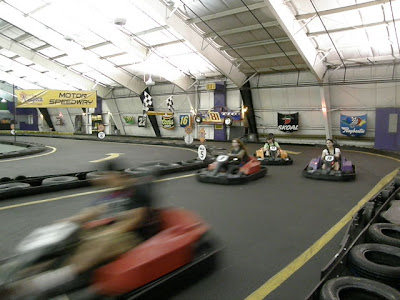 Saturday we met some friends at the Funplex in NJ, where we spent several hours driving go-karts, riding bumper cars, playing Magi-Quest, and cashing out our arcade tickets for cheap trinkets.

Later we went to our friends' new house in the Jersey burbs--they have the coldest swimming pool in the US, which I enjoyed until I could no longer feel my torso.

Around 8pm the boys and I dropped Jen off at a nearby Target while we enjoyed one final hour back at the Funplex.

Sunday we managed to wake up by 11am, had brunch, went to the water terrace at the Museum of Natural History, and ended the day with dinner at Planet Sushi.

Jen is watching "True Blood" on HBO, the boys are playing Nintendo, and the dogs are either sleeping or peeing on something.
Posted by Todd Tarpley at 10:36 PM